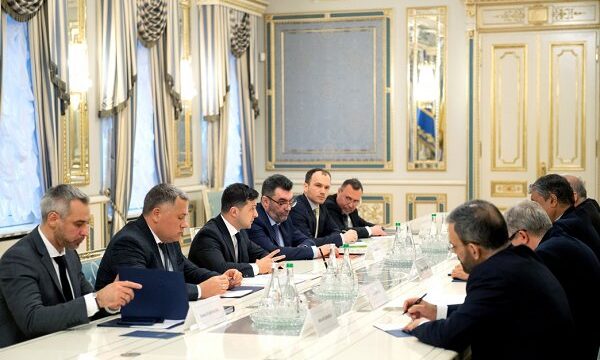 Iran complies with its obligations over flight incident: Ukrainian President

MNA – President of Ukraine Volodymyr Zelenskyy had a meeting with Special Representative of the President of the Republic of Iran Mohammad Eslami on Monday in Kyiv.

Heading an Iranian delegation, Eslami traveled to Kyiv on Monday to discuss the details of the Ukraine International Airlines plane crash that took place on January 8 in Tehran.

Zelenskyy noted that in the matter of clarifying the circumstances of the tragedy, the Iranian party had complied with most arrangements.

“Everything we talked about with the President of Iran was mainly done,” Ukrainian President said.

He noted to the access for 45 Ukrainian specialists to work in Tehran, prompt identification of the bodies of Ukrainian citizens and their return.

He also stressed the need for a further effective investigation into the crash.

Zelenskyy and Eslami discussed the issue of the transfer of the Ukrainian aircraft’s flight data recorders to Ukraine for the purpose of their decryption.

Ukrainian President stressed that Ukraine had the necessary technical means and experienced specialists to perform this work properly.

The parties agreed that all remnants of the aircraft preserved after the accident should be returned to Ukraine.

They also raised the issue of compensation to the relatives of those killed in the plane crash and the creation of a joint investigation team.

The parties expressed their condolences over the deaths of the citizens of Ukraine and Iran.

Eslami arrived in the Ukrainian capital on Monday to express official condolences and sympathy of Iranian President Hassan Rouhani over the unintentional shooting down of a Ukrainian passenger plane outside Tehran.

The General Staff of the Armed Forces of the Islamic Republic later identified the cause of the incident as human error.