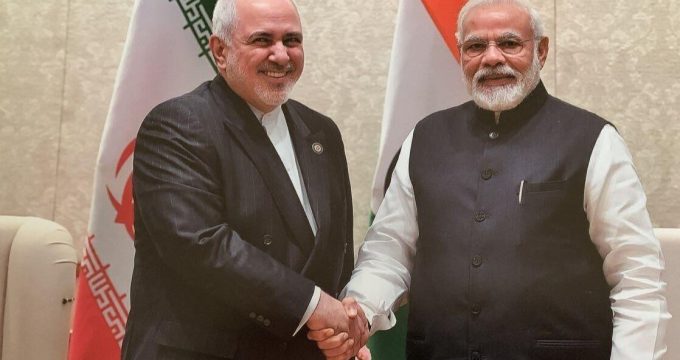 Zarif and mission to strengthen ties; from Muscat to Delhi

IRNA – Iranian Foreign Minister Mohammad Javad Zarif’s recent trips to Muscat and New Delhi, as bilateral and trilateral visits by Iranian, Indian and Omani foreign ministers during these trips, show the efforts by the three countries to strengthen their relations in the region’s most turbulent conditions.

Zarif arrived in Muscat, the capital of Oman, on January 12 to attend the commemoration of the late Sultan Qaboos. It was Zarif’s second trip to Oman in January. Zarif met with Oman’s new Sultan Haitham bin Tariq during the trip.

Zarif extended his condolences to the people and officials of Oman over the passing away of Sultan Qaboos on the eve of his visit on Twitter page, congratulating the succession of “Haitham bin Tariq” as Oman new Sultan, and wrote that “we hope our relations will be as they were before and to inspire the future from the past”.

The Iranian Foreign Minister also recently met with Omani officials on December 23 during a two-day trip to Muscat. Oman’s Foreign Minister Yusuf bin Alawi also arrived in Iran on January 7 to participate in the Tehran Dialogue Forum, a move that, as analysts evaluated as significant amid heightened tensions in the region by the US, meaning broadening consultations between the two neighboring countries on issues.

Zarif’s two-day trip to Muscat, was of interest to analysts amid escalating tensions between Iran and the United States, due to Oman’s mediating role in Iran’s relations with the West. However, many believe that reducing Iran-Oman’s high level of ties to the issue of Muscat’s possible role in the tensions between Tehran and the West is a gross mistake, as Iran and Oman have links in a variety of political, economic, and cultural fields that have been confirmed at Zarif’s two-day trip to Muscat.

During the trip, Zarif held two rounds of talks with his Omani counterpart Ben Ali on political and economic issues. The Foreign Minister, in addition to talking to General al-Naumani, the Chief of Staff of the Sultan Qaboos and the Deputy Sultan of Oman, Fahad bin Mahmoud, on Tuesday morning and met with Yemen’s Ansarollah movement spokesman Mohammed Abdul Salam; where the latest developments in Yemen’s political and field developments were discussed.

Strengthening relations; from Muscat to Delhi

The attempt to maintain bilateral economic relations between Iran and India under sanctions is another speculation about the trilateral meeting of the Iranian, Indian and Oman foreign ministers in Muscat; speculation in light of Zarif’s visit to India January 7-9, at the head of a high-level delegation, including businessmen, and some executives of knowledge-based companies, to hold economic talks and attend the Raisina Economic Conference.

The head of our country’s diplomatic apparatus also lectured on the latest developments, trends and global events at the ICWA, among Indian elites and experts.

Zarif also attended a meeting of Iran-India Economic Forum and delivered a speech that led to the signing of an agreement between the Iran-India Chamber of Commerce.

“Sanctions are not new, we will continue to work with our friends,” he said in a speech, which showed strong and long-standing relations between Iran and India. Iran and India have a long-term engagement for millennia.

Zarif also emphasized the need for dialogue on regional issues and redefining strong regional components, stating he believes that global dialogue and change is very appropriate to our current situation and needs serious attention. Dialogue requires preparation for listening and reassessing assumptions.

An overview of the Tehran-Muscat and Tehran-Delhi officials’  shuttle diplomacy on the one hand and the strengthening relations with India and Oman in particular in the last month indicate the efforts of the three countries to strengthen their relations amid regional tensions due to the involvement of Western countries, especially the United States, has increased. The process also shows the importance of friendly political and economic relations with Iran for regional countries.

Iran foreign policy, Mohammad Javad Zarif, Zarif regional tour January 20, 2020
It wasn’t luck that no US soldiers were killed In Iran’s strikes on Iraq
The United States’ main allies are abandoning Trump as his threats to world leaders backfire