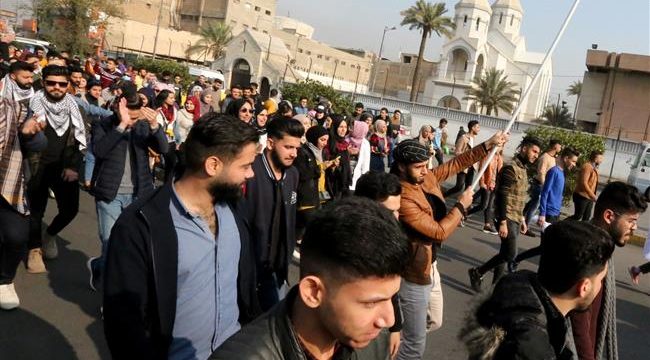 Press TV – Protesters have returned to the streets in cities across Iraq, sealing roads with burning tires and threatening further escalation at a time of difficult economic conditions.

Demonstrations were reported across Baghdad, the holy cities of Karbala and Najaf, as well as the western cities of Nasiriyah, Diwaniyah, Kut, and Wasit on Sunday.

The capital alongside several southern cities began witnessing protests calling for political and economic reforms last October, but they had thinned out in recent weeks in the wake of US assassinations and airstrikes.

On Sunday, young protesters descended on Baghdad’s Tahrir Square and nearby Tayaran Square, burning tires to block highways and bridges and turning back cars and causing traffic jams across the city.

Footage showed protesters throwing projectiles and rocks at police officers who tried to clear the sit-ins. Medical and security sources said dozens of protesters had been wounded.

Riots were also reported in the cities of Kut, Diwaniyah and Amara, where most government offices, schools and universities have been shuttered for months.

In the holy city of Najaf, a number of young protesters in checkered black-and-white scarves lit tires and blocked a main road leading to the capital.

The fresh protests come ahead of a rally called by prominent Iraqi cleric Moqtada Sadr on January 24 to demand the withdrawal of US forces following their recent aggression in the country.

Last week, Sadr urged Iraqis to hold “a million-strong, peaceful, unified demonstration to condemn the American presence and its violations”.

Iraqi political figures have stepped up up their calls for foreign forces — including some 5,200 US troops — to leave the country.

They are outraged by US assassination of top Iraqi military official Abu Mahdi al-Muhandis and Iran’s General Qassem Soleimani who was visiting Iraq on an official invitation.

Iraq’s parliament voted on January 5 in favor of ousting foreign forces, but US President Donald Trump threatened to seize Iraqi oil revenues of up to $35 billion held in a bank account in New York if American troops were asked to leave.

Some Iraqi officials have even warned that the US is transferring Daesh terrorists to Iraq in order to force the parliament to take back its decision.

US forces are relocating Daesh ringleaders from Syria to Wadi al-Houran after the region was cleansed by Hashd al-Sha’abi forces, head of the Badr Organization’s office in al-Anbar Qusai al-Anbari told al-Ma’aloumeh news website on Sunday.

His claim was echoed by Iraqi security expert Karim al-Khikani who told the website that the Daesh ringleaders had been trained at US bases in Syria, specially in al-Tanf and Hasaka.

Abdul-Mahdi resigned nearly two months ago, but political parties have thus far failed to agree on a successor and he has continued to run the government as a caretaker.

According to CNN, Abdul-Mahdi had told at a parliamentary session that he planned to meet with Gen. Soleimani on the morning he was assassinated on Trump’s order.

The Iraqi premier said Gen. Soleimani was carrying a message from Iran in response to Saudi Arabia which had sought to “reach important agreements and situations regarding Iraq and the region.”

Unconfirmed reports say the Iraqi prime minister also revealed details of his interactions with Trump in the weeks leading up to Gen. Soleimani’s assassination in a speech to the parliament.

He tried to explain several times on live television how Washington had been browbeating him and other Iraqi members of parliament to toe the American line, even threatening to engage in false-flag sniper shootings of both protesters and security personnel in order to inflame the situation.

Parliament Speaker Mohamed al-Halbousi reportedly cut Abdul-Mahdi off at the commencement of his speech and then asked for the live airing of the session to be stopped.

Abdul-Mahdi spoke angrily about how the Americans had ruined the country and now refused to complete infrastructure and electricity grid projects unless they were promised 50% of oil revenues, which the Iraqi premier refused.

“This is why I visited China and signed an important agreement with them to undertake the construction instead. Upon my return, Trump called me to ask me to reject this agreement. When I refused, he threatened to unleash huge demonstrations against me that would end my premiership,” Abdul-Mahdi reportedly told parliament.

“Huge demonstrations against me duly materialized and Trump called again to threaten that if I did not comply with his demands, then he would have Marine snipers on tall buildings target protesters and security personnel alike in order to pressure me.

“I refused again and handed in my resignation. To this day the Americans insist on us rescinding our deal with the Chinese,” he allegedly added.

In a move to stem public anger, Iraq’s parliament approved a new electoral law in December that enabled the electorate to choose individual candidates instead of picking from party lists.

The rallies, however, turned violent in which hundreds of people were killed, including members of the security forces.

On Sunday, Iraqi cleric Sadr called on protesters to refrain from violence.

“I hope they are committed to peace, not to harm the security of the people and to subject the country to a fierce civil war,” read a statement posted on his Twitter feed.

“I respect the government’s decision – if any – to confront saboteurs and riots, but a distinction must be made between peaceful [protesters] and saboteurs,” he added.