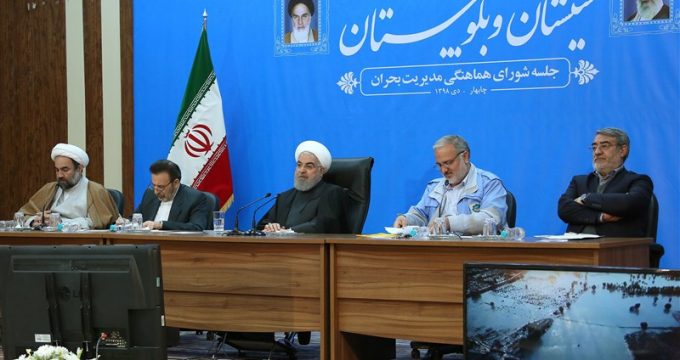 Tasnim – Iranian President Hassan Rouhani made assurances that his administration would use all its power and capacities to help rebuild areas damaged by recent flooding in the southeastern parts of the country.

“I am proud that one week after the floods happened, the water and power supply problems have been resolved,” Rouhani said, addressing a session of the Crisis Management Task Force of Sistan and Balouchestan Province on Saturday evening.

The president also instructed the Minister of Energy to speed up the process of completing two dams in the province and said that 14,000 urban and rural housing units will be reconstructed.

“I assure the flood-hit people of Sistan and Balouchestan that the administration will mobilize all its power and equipment to reconstruct (the areas damaged by) the incident,” the president went on to say.

Sistan and Balouchestan has been affected in the most severe way due to record-breaking rainfall in years.

Flood poured into the province, as well as neighboring Kerman Province, inundating around 350 villages, and interrupting the people’s lives in the area.

Heavy rainfall over the last days has caused seasonal rivers to flood into towns, causing extensive damage to infrastructures and people’s homes.