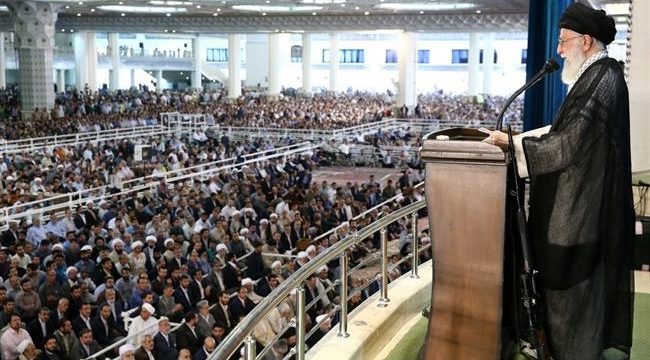 Iran Leader: IRGC blow tarnished image of US as superpower

IRNA – The Supreme Leader of the Islamic Revolution Ayatollah Seyyed Ali Khamenei said the day the IRGC missiles attacked the US bases were among the days which truly a major blow to the US as it tarnished its image as a superpower.

He made the remarks during his first sermon delivered to the Friday Prayers attended by a huge number of people in Imam Khomeini Mosalla (prayers ground) in the capital.

The leader said the Zionist news and media propaganda machine in the days before and after the assassination made every effort to link the name of the grand martyred warrior with terrorism, the US president and foreign secretary focused on this notion and the Zionist news machine all across the world repeated the same allegations but the Almighty changed things to just the opposite of what they wanted so that people not just in Iran but in other countries came out in reverence of the martyred Iranian commander and set the US and Zionist regime flags ablaze.

All this reveals the hand of God in work, the Leader added.

The Supreme Leader said that Iran experienced two weeks of extraordinary happenings but was successful in foiling the plots by the Zionist media who tried to distort realities about the assassination of the IRGC commander Leuitanent General Qasem Soleimani.
He hailed the massive turnout of the Iranian nation in the funeral procession for the IRGC grand commander Lieutenant General Qasem Soleimani who was assassinated by the US forces in Baghdad Jan 3, 2020, and said it marked a day when millions of people in Iran and hundreds of thousands in Iraq and some other countries took to streets to register the biggest public ceremony in the world to their names.

Ayatollah Khamenei said that was a day that belonged to God.

The day when IRGC’s missiles hit the US base is another day of God. These two days are turning points in the history and are not ordinary days, he said.

That a force of a country was able to slap the biggest bullying power in the face reveals the powerful hand of God, he said.

This the first Friday Prayers the Leader is leading in eight years.

Political analysts maintain that given the recent developments, including the martyrdom of Commander of IRGC Quds Force Lieutenant General Qasem Soelimani, the Supreme Leader will focus on the most important issues in his sermons.