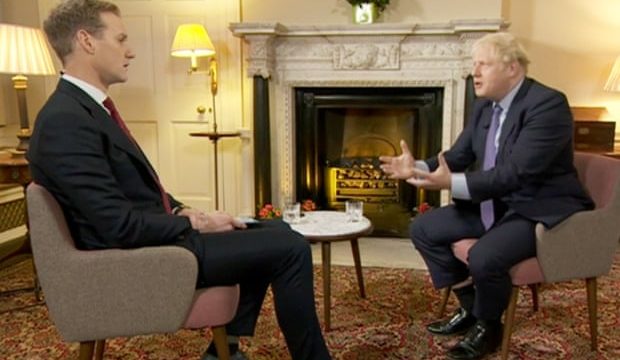 On air, Johnson’s brain began to engage with itself – but not reality

The Guardian | John Crace: Resembling one diagnosed with a reality bypass, PM had waffle on the menu for BBC Breakfast

The cameras had been broadcasting clips of absolutely nothing going on in Downing Street throughout the first two hours of BBC Breakfast. Almost as if the producers didn’t quite trust the prime minister not to back out of his first televised interview since the election and wanted to shame him into going through with it. Or at the very least to have footage of him sneaking out a rear window.

But for once Boris Johnson was as good as his word and shortly after 8am the BBC’s Dan Walker found himself face to face with a figure who looked as if he had just tumbled out of bed.

Let’s start with Iran, said Walker. Boris clasped his knees tightly, trying desperately to remember exactly where Iran was and why it was important. It was quite early in the morning. Then it came to him. “I don’t want a military conflict,” he said hesitantly. A decent enough start, given the circumstances – it will have come as a huge relief to a lot of people who might have been expecting him to declare war.