Reuters – Iran is relying on its neighbouring countries to sell a surplus of gasoil it has created at home due to U.S. sanctions, trade documents and industry data showed.

Iranian oil products, like its crude, fall under U.S. sanctions, but Tehran has significantly increased exports of gasoil in recent months, to some countries in the region including Iraq and Syria, by offering massive discounts.

Exports of gasoil, a refined product used in heating, power generation and transport, surged to around 95,000 barrels per day (bpd) in the fourth quarter of 2019, more than 80% higher than the previous quarter and nearly four times higher than the first quarter, data from consultancy FGE showed. 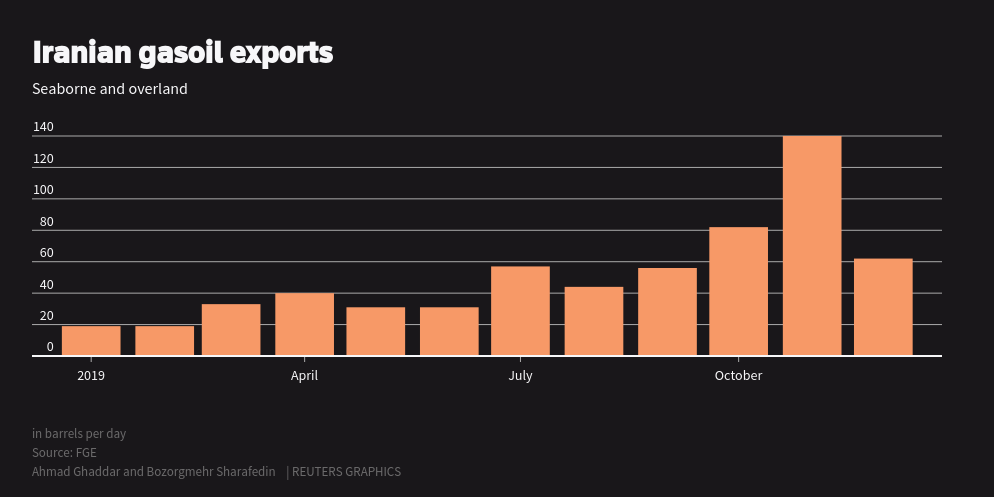 The data is based on FGE estimates of Iranian gasoil exported by ship or trucked overland to neighbours such as Iraq, Afghanistan, and Pakistan and further to Syria.

Unlike crude oil, where the ultimate buyer is a refinery, products such as gasoil can find their way to potentially thousands of small-scale industrial or residential buyers, making it difficult to trace. 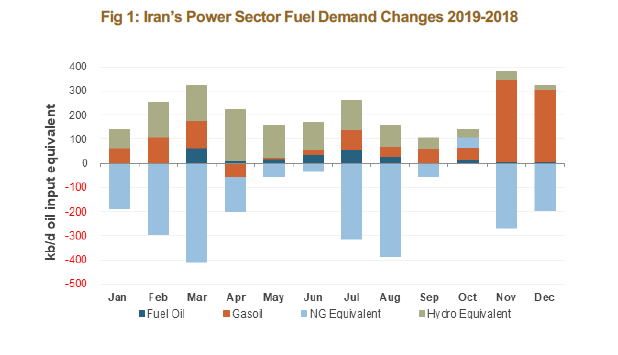 Iran’s crude oil exports were slashed by more than 80% due to re-imposed sanctions by the United States after President Donald Trump last year quit Iran’s 2015 nuclear deal with world powers.

A trade document seen by Reuters showed a company based in Baghdad placed in late September an offer on 150,000 tonnes of Iranian gasoil for delivery to the Syrian port city of Banias.

In the document, Commercial Bank of Syria was listed as the buyer’s bank and Iran’s Bank Saderat was cited as the seller’s.

The U.S. Treasury imposed sanctions on Bank Saderat in 2018 saying it wanted to disrupt Iran’s ability to fund its “malign” activities in the region. The Commercial Bank of Syria is also under U.S. sanctions for dealings with several Iranian banks including Bank Saderat.

The two banks and the Iranian oil ministry did not immediately respond to a Reuters request for comment.

Referring to massive discounts offered by Iran to sell the surplus gasoil, a person familiar with these trades told Reuters “They say we just want to sell it; Price is not an issue.”

Meanwhile, many power generators in Iran have switched in recent months from gas to gasoil, to help reduce the gasoil glut in the country. 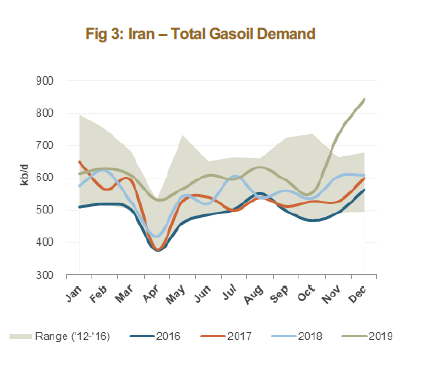 The share of natural gas input in Iranian power plants was halved in 2019 compared to 2018, FGE said, while input of gasoil and fuel oil in December soared to 600,000 barrels per day, twice the input amount a year earlier.
n 2020, we anticipate Iran will have to cut even more natural gas use from its power sector, because of the forced cutback in natural gas output due to the limited storage capacity for condensate,” FGE said.
Iran nuclear deal, Iran-US tensions, Iran's Gasoil export, US sanctions against Iran January 16, 2020
US Treasury Dept will allow 90-day wind-down period for fresh Iran sanctions
Ayatollah Khamenei starts sermon at Tehran Friday prayers