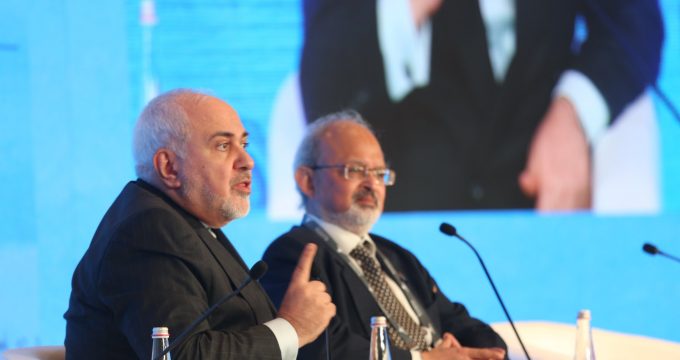 Zarif: Regional tensions a true reflection of US ignorance

IRNA – Iranian Foreign Minister Mohammad Javad Zarif said on Wednesday that assassination of General Soleimani and increase of tensions in the region are reflection of US’ ignorance and arrogance.

Addressing the Raisina Dialogue 2020 in India, Zarif said unpleasant developments over the last two weeks were the reflection of US view toward issues.

US assumed that after assassination of a respected commander, people of Iran and Iraq will dance in the streets, he added.

While General Soleimani traveled to Iraq to make the situation calm after killing of 25 members of the Iraqi parliament and armed forces, US accused him of waging war against US, he noted.

Elsewhere in his remarks, Zarif referred to paragraph 123 of the nuclear deal, saying Europeans are independent nations but they did not comply with their commitments.

This is while, Iran has been fully committed to the deal, he said.

He noted that Europeans gave no response to letters from Iran, foreign companies have left Iran meaning that Europeans have violated the JCPOA and let US bully.

Iran is not an issue in the JCPOA but it is a member of the deal, Zarif said adding that accordingly Iran will be ready to reverse to its full compliance if Europeans are committed.

Iran has fully implemented its commitments, he said adding that Europe and the US have breached their commitments under their JCPOA.

They have not implemented eleven commitments namely in banking, financial, trade and plane sectors.

Iran reduced some of its commitments based on the JCPOA articles and after giving enough opportunity to Europeans, he said.

He went on to say that US’ presence in Iraq has no benefit for economy of the country, adding that Iraqis are after expelling US from their country.

Referring to Trump’s threat with regard to targeting cultural centers in Iran as a war crime, Zarif said Iran targeted US’ bases for its self-defense.

The foreign minister said that Iran is an advocate of reducing tension and preventing further weapons of mass destruction in the region.

So, Tehran agrees Moscow on proposal made by the Russian Foreign Minister Sergei Lavrov to form a joint security mechanism for the Middle East region, Zarif noted.

“Our region” needs hope for the young generation [to be encouraged] to come back to their homelands, Zarif stressed.

** US has never brought peace to the region

The United States has never brought peace and stability to the region, and the events in Afghanistan prove this claim, Zarif said.

US President Donald Trump confessed that it has expended billions of dollars in the Middle East but gained nothing, Zarif noted.

Zarif also talked about the behavior of the US president, saying that Trump simply violates the international regulations.

Trump says if the Iranian people require food or medicine, they have to do what the US tells them, Zarif added, stressing that the US Secretary of States Mike Pompeo has also repeated such remarks, but he should hire a powerful lawyer.