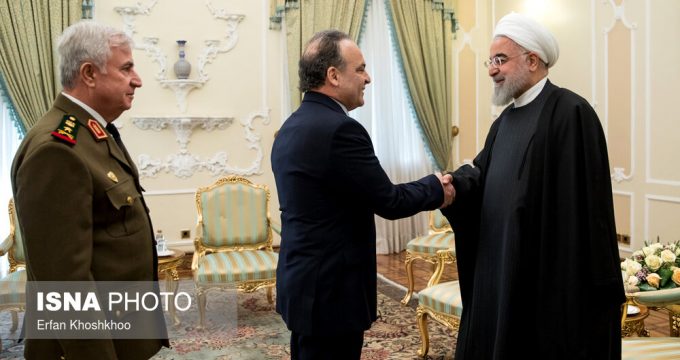 President.ir – Referring to the need for the two countries’ authorities to try to facilitate and accelerate the implementation of agreements and contracts, saying, “The Islamic Republic of Iran is determined to further deepen Tehran-Damascus relations in all fields of mutual interest”.

Speaking in a meeting with the Prime Minister of Syria Imad Khamis on Tuesday, President Hassan Rouhani appreciated the condolences of the Syrian government and nation over the martyrdom of Lieutenant General Qasem Soleimani in US terrorist act and the loss of a number of Iranians in the plane crash.

He said, “The martyrdom of Gen. Soleimani was a major grief for the Iranian nation which was multiplied after the plane crash”.

“Lieutenant General Qasem Soleimani is a great martyr not only for the Iranian nation, but also for all free peoples of the region,” Dr Rouhani said.

The president added, “Today, Americans’ interference in the affairs of other countries and their efforts to dominate the Syrian oil wells have made it clear that they have never cared about the interests of the nations of the region”.

Dr Rouhani noted, “The Islamic Republic of Iran has always supported the oppressed nations against the Arrogance and will continue this process as it has been on the path of combatting terrorism alongside the Syrian government and nation”.

Stating that the cooperation between Iran and Syria and other countries continue until final victory is reached and terrorists are rooted out, occupying foreign forces withdraw from the Syrian soil and Syrian refugees return to their homeland, Dr Rouhani said that the Syrian constitution committee can achieve what is desirable for its people.

At the same meeting, the Syrian Prime Minister Imad Khamis condoled the martyrdom of Lieutenant General Haj Qasem Soleimani, saying, “The martyrdom of Gen. Soleimani was a great tragedy for all free nations of the world”.

The Syrian Prime Minister added, “The courage and heroism of the martyr Soleimani is indescribable and his memory will always remain in the minds of the Syrian people, because the Resistance Movement in the region owes a great deal to General Soleimani”.

Imad Khamis said that the Iranian missile attack on the US base in retaliation for the martyrdom of General Soleimani had a clear message to the governments and nations of the region and the world, adding, “This showed the enemies that the Arrogance has no place in this region anymore”.

“The presence of Americans in Syria is a clear example of occupation, and we believe that all nations and governments must stand against their illegitimate presence in the region,” the prime minister said, stressing that resistance and efforts for eradicating terrorism in the region would continue.

The Syrian prime minister also condoled the loss of a number of Iranians in the plane crash, saying, “Iran’s action to accept responsibility for the incident indicates the wisdom and honesty among the officials of the Islamic Republic of Iran”.

Imad Khamis said that the Syrian people have always appreciated the support of their Iranian brothers, emphasising efforts to develop and strengthen cooperation between the two countries in various sectors, including business and economic relations, saying, “In the reconstruction process of Syria, Iran is definitely our top priority and we invite companies and the private sector to participate in Syrian projects”.

Hassan Rouhani, Imad Khamis, US withdrawal from region January 14, 2020
Activities of Resistance Front to continue till ousting US from region: Rezaei
‘We Could Feel the Shock Wave’: How US troops withstood attack on Iraq base