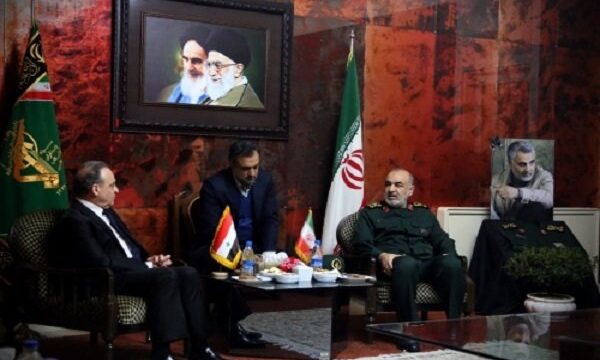 MNA – Islamic Revolutionary Guard Corps (IRGC) Chief Major General Hossein Salami said that Lt. Gen. Soleimani architected the battleground failures of the US and the Zionist regime in the region.

He made the remarks in his meeting with Syrian Prime Minister Imad Khamis on Tuesday in Tehran.

Salami expressed gratitude for Syria’s condolences on the martyrdom of Lt. Gen. Soleimani, saying, “Martyr Soleimani is a unique, unrepeatable, eternal commander whose name and deeds will never be erased from the memory of Muslim nations.”

“Lt. Gen. Soleimani architected the battleground failures of the US and the Zionist regime in the region,” he said, adding, “Today, the enduring influence of this great commander can be clearly seen among the Resistance Front.”

Referring to the IRGC missile attack on US bases in Iraq, he said, “It was an extraordinary epic act which displayed the authority of the Islamic Republic of Iran, and the Zionist regime and the enemies of the Islamic world received the message.”

Emphasizing that the Islamic Republic of Iran respects the territorial integrity of Syria, he said, “We will stand by Syria until the last of Syria’s enemies leave the country.”

Syrian Prime Minister Imad Khamis, for his part, said that Lt. Gen. Soleimani will remain in the hearts of the Syrian people for many years, adding, “We brought top military medal of Syrian Armed Forces to dedicate it to his family.”