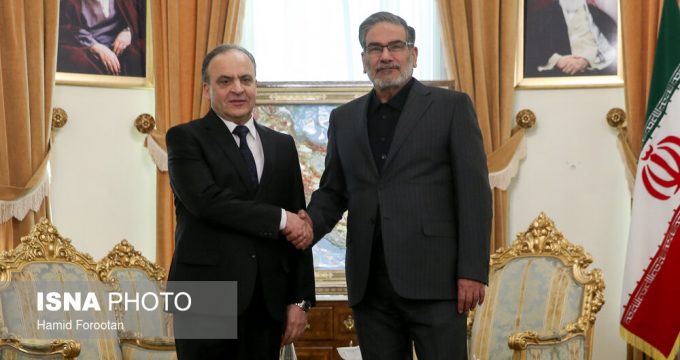 US withdrawal from region should be top priority: Shamkhani

MNA – Stating that the West Asian region will not achieve stability, peace, and security until US terrorist forces are present in this region, the Secretary of Supreme National Security Council (SNSC) said that undoubtedly the US departure will be realized by the unity of regional nations and governments.

He made the remarks on Monday in his meeting with Syrian Prime Minister Imad Khamis.

Rear Admiral Ali Shamkhani said, “The Islamic Republic of Iran once again proved that it would not renounce its national security and interests under any circumstances by launching missiles on US military base Ain al-Assad in Iraq and crushing response to US crime.”

“Trump and his stupid advisers imagined that the resistance front would collapse in the region with the assassination of the brave Resistance commander, Haj Qasem Soleimani,” he said, adding, “The blood of this martyr and his companions has further strengthened the Resistance Front.”

Stating that the West Asian region will not achieve stability, peace and security until US terrorist forces are present in this region, he said, “Undoubtedly the US departure will be realized by the unity of regional nations and governments.”

Referring to Zionist attacks on the Resistance bases, Shamkhani noted, “Undoubtedly, the martyrdom of Lt. Gen. Soleimani will make the Resistance Front more resolutely confront the aggressive actions of the Zionist regime.”

He announced support for the Syrian government’s efforts to end the presence of terrorist groups in Idlib, saying, “Looting Syria’s oil and plundering its resources is another tragedy that could end with US complete withdrawal from the region.”

Syrian Prime Minister Imad Khamis, for his part, offered his condolences over the assassination of Lt. Gen. Soleimani and the Ukrainian passenger plane incident.

“Martyr Soleimani’s goal was to defend the oppressed people who were under the oppression of the US, the Zionist regime and the domination system,” he said.

Appreciating the unique effort and support of the Islamic Republic of Iran to the Syrian people in the fight against terrorism, he added, “Now, the sedition of terrorism is on the verge of extinction by efforts of the government, the army and the Syrian people, and the support of friendly countries. We should strive to expand strong bilateral relations between the two countries by developing economic and commercial cooperation.”

The visit by the Syrian delegation aims at discussing bilateral ties and the latest regional and international developments, as well as offering condolences to senior Iranian officials over the martyrdom of Lieutenant General Qasem Soleimani.