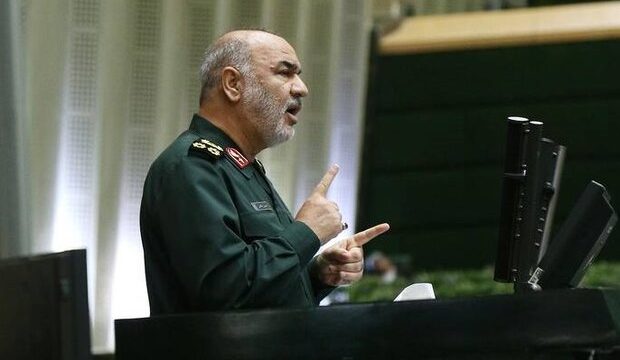 MNA – In a closed session on Sunday, Islamic Revolutionary Guard Corps (IRGC) Chief Major General Hossein Salami explained about the conditions that led to the downing of the Ukrainian aircraft.

“Concerning the incident, we are saddened more than anybody else and never thought we would carry out an action that could harm people,” Salami said.

“The operator was informed of cruise missiles targeting some points in Iran, for few moments he was disconnected with SOC,” he explained, “Therefore he mistook the passenger flight fir a missile and shot it down.”

Salami told MPs that it was IRGC who initially raised the hypothesis of the passenger plane being mistakenly brought down by a missile.

“We had not been certain until Wednesday evening about what actually had happened,” he underlined expressing his deep grief for the unintentional mistake.

“We will compensate for our mistake,” he vowed.

He told the MPs that after Iran’s retaliatory attack on the US Ain al-Assad airbase in Iraq’s Anbar Province, multilayered projections were made in case the Americans embarked on reprisals so that IRGC could make necessary plans and predictions.

“What came to pass was that we had locked horns with a superpower, and naturally the country was not under regular conditions,” he added.

He said that in its airstrikes to Ain al-Asad, IRGC did not seek to kill US soldiers but to deal major damage to their weapons and equipment.

Salami added that the strikes were carried out due to the demand of the Iranian nation for taking a hard revenge for martyrdom of Lt. Gen. Soleimani.

He said that after the operation in Ain al-Asad, Iran started an electronic warfare, which forced all the American air crafts away.