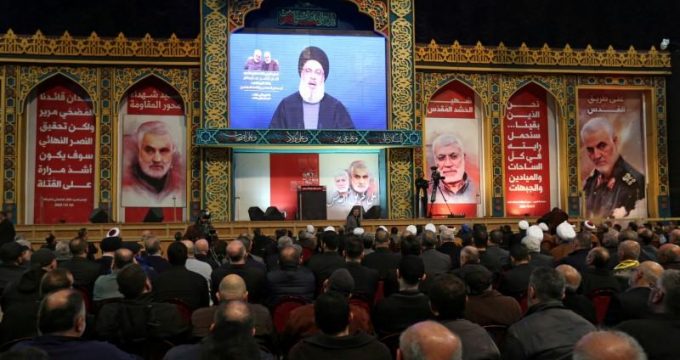 Reuters – Lebanon’s Hezbollah said on Sunday it was time for Iran’s allies to begin working to retaliate for the killing of Major General Qassem Soleimani though it would be a “long path” to the goal of ejecting U.S. forces from the region.

Sayyed Hassan Nasrallah also denied the Iranian general had been planning to blow up U.S. embassies. U.S. President Donald Trump said he had been killed after he landed in Baghdad in part because “they were looking to blow up our embassy”.

Hezbollah, a heavily armed group designated as a terrorist organization by the United States, was established in 1982 by Iran’s Revolutionary Guards and is an important part of a regional Tehran-led alliance known as “the axis of resistance”.

Iran responded for Soleimani’s killing by launching missiles at two military bases in Iraq that house U.S. forces on Wednesday. Iran’s Supreme Leader Ali Khamenei called it a “slap on the face” of the United States and said U.S. troops should leave the region.

Though the region remains tense, both sides have backed off from intensifying the conflict since the Iranian attack.

Nasrallah said last week that Iran’s allies, which include the Syrian government and numerous paramilitary groups set up with Iranian support in Iraq and Syria, should help exact revenge for Soleimani’s killing.

“I believe it is time for the axis of resistance to start working,” he said in his speech on Sunday.

“The resistance forces are serious and aiming for the big goal that I proposed,” Nasrallah said, referring to the objective of seeing U.S. forces leave the region.

Retaliation would happen in the “coming days, weeks and months”, he said, adding “this is a long path”.

Explaining the decision to kill Soleimani, Trump said on Thursday “they were looking to blow up our embassy”.

He also said the United States carried out the strike because of a rocket attack on a U.S. military base in Iraq by an Iran-backed militia in December that killed a U.S. contractor, which U.S. officials believe Soleimani had a role in orchestrating.

Nasrallah said: “Trump is lying to his people … Haj Qassem Soleimani was not planning to blow up American embassies.”