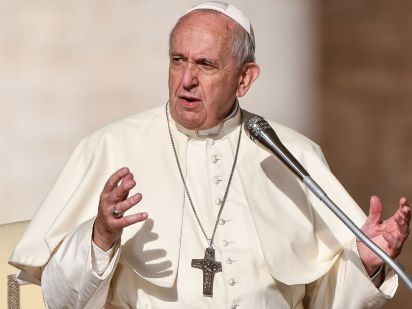 Pope Francis calls for dialogue, self-restraint between Iran, US

MNA – Pope Francis urged the US and Iran to practice “dialogue and self-restraint” to defuse recent tensions.

“Particularly troubling signals are coming from the entire region following the heightening of tensions between Iran and the United States,” Francis told the diplomats from more than 180 states.

He said the tensions risked “compromising the gradual process of rebuilding in Iraq, as well as setting the groundwork for a vaster conflict that all of us would want to avert”.

“I, therefore, renew my appeal that all the interested parties avoid an escalation of the conflict and keep alive the flame of dialogue and self-restraint, in full respect of international law,” he said.

In the first step of hard revenge on the US over the assassination of Lt. General Soleimani Iran’s IRGC force fired tens of ballistic missiles at Ain Al-Assad base in Iraq on Wednesday. Ain al-Assad is an Iraqi airbase that the US terrorist forces are stationed there.