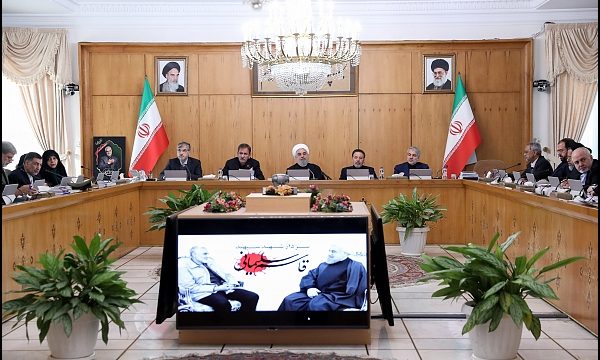 Rouhani: Ultimate revenge is to end US presence in region

Press TV – President Hassan Rouhani says ending the United States’ presence in the region will be the “ultimate revenge” to be exacted on Washington by the regional nations.

President Rouhani was addressing a cabinet meeting in Tehran on Wednesday, after Islamic Revolution Guards Corps (IRGC) struck two US bases in Iraq in response to an American drone strike that assassinated Commander of the IRGC’s Quds Force Lieutenant General Qassem Soleimani in Baghdad on Friday.

“We believe that the US should receive its chief response from the nations of the region,” the Iranian president said. “They cut off dear General Soleimani’s hand in this atrocity. The revenge for this is for us to sever and cut off the US’s feet from this region.”

Among others killed in the drone airstrike was the second-in-command of Iraq’s Popular Mobilization Units (PMU), Abu Mahdi al-Muhandis.

Soon after the assassinations, Leader of the Islamic Revolution Ayatollah Seyyed Ali Khamenei said Washington was to face a “harsh revenge” for the atrocity.

Early on Wednesday, the IRGC fired volleys of ballistic missiles at Ain al-Assad Airbase in the western Iraqi Anbar Province, and another outpost in Erbil, the capital of the semi-autonomous Iraqi Kurdistan, both of which housed US forces. There have been initial reports of casualties.

Rouhani said Washington would not be able to avoid the repercussions of the assassinations as the atrocity had “seared the hearts of hundreds of millions of freedom-seeking people in the world.”

The first response the US was dealt with after the assassination manifested itself in the form of arduous millions-strong funeral processions held across Iran and Iraq for those martyred in the assassinations, the Iranian president said.

He described the consolatory message as “a big slap on the mouth” of the US given the fact that the religious authority was a figure revered by Iraqis of all religious affiliations and ethnicities.

Rouhani pointed to a recent vote by the Iraqi parliament in favor of withdrawal of all US-led forces from the Arab country and said, “Through its courageous vote, the Iraqi parliament paved the way for the US’s eternal expulsion from Iraq, and, God willing, the region in the future.”

“Americans would be wise not to perpetrate any more atrocities at this juncture,” Rouhani said. However, he added, should they commit any such mistake, the Iranian people and Armed Forces are prepared for countermeasures.

He warned that another act of aggression by the US would be met with “a stronger response.”

The chief executive, meanwhile, denounced the US’s way of pinning attacks that target its interests in the region on what Washington calls “Iran’s proxy forces.”

“We do not maintain any proxy forces since, nations today are free, and no force in any country acts under our command,” Rouhani said.

Ain al-Assad, Hassan Rouhani, Iran airstrike on US, Soleimani assassination, US troops in region January 8, 2020
Photos: Ukraine Intl. Airlines plane crashes in Tehran after takeoff
Iran writes to UN: We’re not after war but reserve right to self-defense against US threats