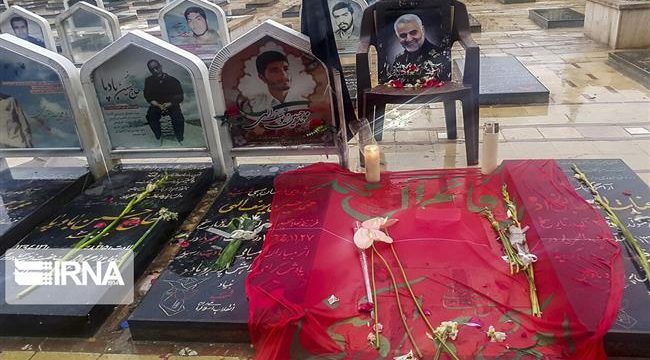 Gen. Soleimani laid to rest in hometown after revenge attacks on US bases

Press TV – Senior Iranian commander Lieutenant General Qassem Soleimani, who was assassinated by the US in Iraq, has been laid to rest in his hometown Kerman, shortly after Iran’s Armed Forces launched retaliatory missile strikes on American bases in Iraq.

The body of the Middle East’s most prominent anti-terror commander was buried at  the Martyrs’ Cemetery in Kerman early Wednesday.

It came after million-strong funeral processions for the martyred head of the Quds Force of the Islamic Revolution Guards Corps (IRGC), in the Iraqi cities of Kadhimiya, Baghdad, Karbala and Najaf as well as the Iranian cities of Ahvaz, Mashhad, Tehran and Qom.

The burial service had been planned to be held on Tuesday, but it was delayed due to overcrowding at the site.

The ceremony shortly after the IRGC fired rockets at US military bases in Iraq’s Anbar Province and Kurdistan’s regional capital, Erbil, at 1:20 a.m. local time, the moment when the US military carried out a drone strike on Friday against General Soleimani’s motorcade upon his arrival in Baghdad at the invitation of the Iraqi government.

General Soleimani is viewed by the world’s freedom-seeking people as the key figure in the Middle East battles that led to the collapse of Daesh, the world’s most notorious terror group.