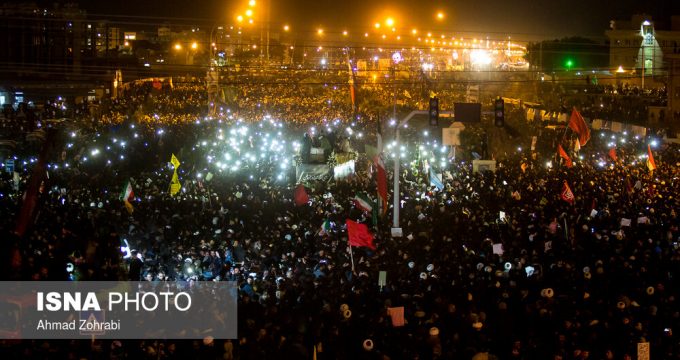 MNA – Hundreds of thousands of people in Qom packed the streets of the holy city to bid farewell to the Iranian anti-terror commander, Lieutenant General Qasem Soleimani, who was martyred by US terrorists in Baghdad on Friday.

The bodies of the martyred commander and his Iranian companions were first transferred to the Iranian cities of Ahvaz and Mashhad, where massive funeral processions were held on Sunday.

They arrived in Tehran on Monday morning, then to the holy city of Qom in late evening after some hours of delay.

Religious groups and mannerists convened at the holy shrine of Fatima Masoumeh and mourned the martyrdom of IRGC Quds Force commander and his comrades.

A number of well-known Shia marja’s also attended the processions in the holy shrine.

Finally, the bodies will arrive in Lit. Gen. Soleimani’s hometown, Kerman, in the southeast for burial on Tuesday.

Both Soleimani and Muhandis were popular figureheads putting a stop to the rise of ISIL terrorism which once came as close as 30 km to Baghdad, while the US withdrew troops from Iraq and did nothing to stop the terrorists’ advances.

The assassination has triggered a wave of outrage among Iranians and Iraqis, and further aligned the two neighbors with vociferous calls for revenge for what they view as “state terrorism.”

Iran’s Supreme National Security Council said in a statement that a harsh vengeance “in due time and right place” awaits criminals behind Soleimani’s assassination.