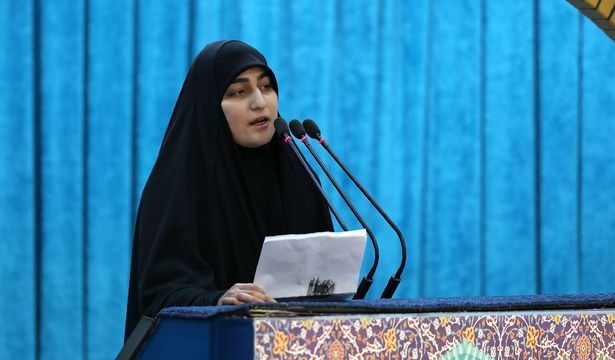 IRNA – Zeinab Soleimani, the daughter of Lieutenant General Qasem Soleimani said on Monday that his father devoted his life to serve the country.

Speaking in the funeral procession of the martyr, Zeinab Soleimani said that the late General had been engaged in combat with enemies of the country for 40 years.

My father was longing for martyrdom, she said adding the General was proud of being the soldier of Supreme Leader of the Islamic Revolution Ayatollah Seyyed Ali Khamenei.

He had scared the Takfiri groups, tyrants as well as the oppressors to death, she underlined.

She said that even the name of Qasem Soleimani is frightening the den of the Zionist regime.

She rebuked US President Donald Trump for ordering the assassination, saying that the US is accountable for state terrorism by targeted airstrike against Iranian Commander.

Lieutenant General Soleimani was the Islamic Revolution Guard Corps’ (IRGC) Quds Force commander who was assassinated by the US alongside the acting Commander of the Iraqi Popular Mobilization Units (PMU), known as the Hash al-Shaabi, Abu Mahdi Al-Mohandes, and eight other military forces who were fighting the Daesh (ISIS) forces in Iraq.

The body of General Soleimani and the acting Commander of the Iraqi Popular Mobilization Units (PMU), known as the Hashd al-Shaabi, Abu Mahdi Al-Mohandes and other martyrs of the US state terrorism was first taken from Iraq in Ahvaz, the southern city of Iran, on Sunday.

His next destination was Mashad, northeastern Iran. He was welcomed by millions of people gathering together from the city and all the cities and towns around it. The number of people was so many that the Islamic Republic Guard Corps could not transfer the body to Tehran until after midnight.