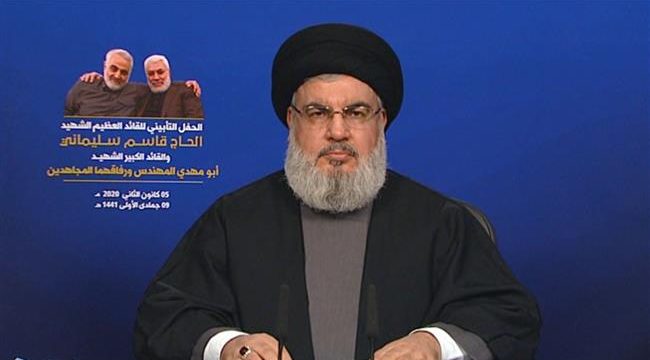 US soldiers, officers will go home in coffins after Soleimani assassination: Nasrallah

“When the coffins of American soldiers and officers begin to be transported … to the United States, (President Donald) Trump and his administration will realize that they have really lost the region and will lose the elections,” Sayyed Hassan Nasrallah said in a televised speech broadcast live from the Lebanese capital city of Beirut as he addressed his supporters on Sunday evening.

Nasrallah said the response to the assassination of General Soleimani was not only Iran’s responsibility, but also that of the entire axis of resistance.

Nasrallah added that attacks on US military forces in the Middle East will be “fair punishment” for the crime, listing US bases, naval ships and military personnel.

The Hezbollah chief further noted that US act of terror marks the start of a new phase for the entire Middle East.

“The targeted killing of General Soleimani and Muhandis is the begging of a new era not for Iraq or Iran, but for the whole region,” Nasrallah said.

The leader of Hezbollah movement added that the two top military commanders attained their ultimate goals by embracing martyrdom, extending his deepest condolences to their families.

“The martyrdom of General Soleimani and Muhandis marks another victory of blood over sword,” Nasrallah said.

The Hezbollah head added, “We are witness to a heinous crime whose perpetrators are well-known. US President Donald Trump said he had ordered the (drone) strike (on the airport in Baghdad, Iraq).”

“More than three years into his presidency, Trump has failed to accomplish the goals he had defined at the beginning of his tenure. Previous US attempts to assassinate General Soleimani had ended in failure. All of Trump’s forms of pressure to subdue Iran have also failed to realize that goal.

Elsewhere in his remarks, Nasrallah said, “US scenarios in Syria have been foiled. Trump has abandoned the Kurds and his decision concerning the withdrawal of American troops represents his confusion. All attempts to undermine the resistance front in Lebanon and Yemen have been unsuccessful as well.”

The Hezbollah secretary general went on to note that Trump did not manage to impose the “deal of century” thanks to the Palestinian nation’s steadfastness.

“Trump was very clear. He wanted to wrest control over the Iraqi oil. Trump had been using Daesh (terror group) as a pretext to control Iraq and its wealth. Such a scheme failed, thanks to General Soleimani and Muhandis, who fought Daesh,” Nasrallah said.

He underlined that the US was about to lose control of Iraq following the defeat of Daesh and parliamentary polls in the country.

“Washington then sought to drag Iraq into civil war, and sow the seeds of discord between Baghdad and Tehran. The US is heading to elections with no real achievements secured by Trump.”

“The US wanted to hit a central figure in the axis of resistance, so they targeted General Soleimani,” Nasrallah commented.

The Hezbollah chief highlighted that the top Iranian general posed a real threat to the Tel Aviv regime, but Israeli officials did not dare to assassinate him.

“The retaliation for General Soleimani’s assassination has already started in both Iran and Iraq. Eyes are now on the Iraqi parliament to approve a resolution on US troops withdrawal from the country. Iraqis won’t leave US troops there alone. The minimal retaliation is to liberate Iraq from the presence of US forces,” Nasrallah said.

“The martyrdom of General Soleimani and Muhandis will provide new incentive to press ahead with resistance in the face of the US and the Zionist regime.

“Assassination of Soleimani means targeting the entire axis of resistance. In terms of retaliation, there is no figure in the opposite front to match General Soleimani and Muhandis,” the Hezbollah chief underlined, noting that Soleimani’s shoe was more valuable than Trump’s head.