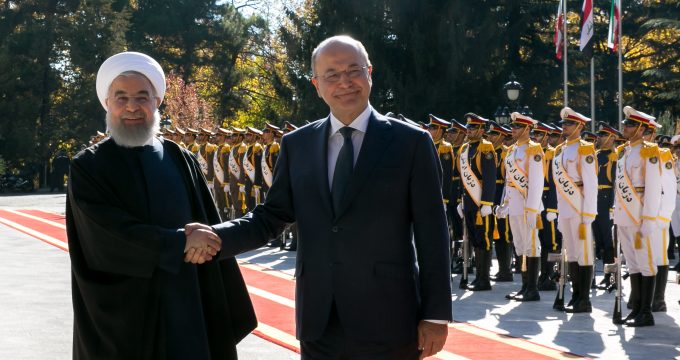 Press TV – Iranian President Hassan Rouhani has made it clear in a phone call with his Iraqi counterpart, Barham Salih, that the two neighbors will remain close allies even as they mourn high-profile commanders recently assassinated by the United States.

On Friday, the US military, under a direct order from President Donald Trump, targeted two vehicles carrying General Qassem Soleimani, the commander of the Quds Force of the Islamic Revolution Guards Corps (IRGC), and the second-in-command of Iraq’s Popular Mobilization Units (PMU), Abu Mahdi al-Muhandis, in Baghdad, killing all 10 people on board.

Speaking to Salih over the phone, Rouhani said on Sunday evening that the martyrs’ blood will bring the two countries even closer.

“The blood of these great commanders sets the stage for a new development in the region. It will help cement the strong ties between the two nations,” the Iranian president said.

Rouhani thanked the Iraqi government and nation for holding mass processions for the martyrs and said the large crowds of people who flocked to the streets in Baghdad, Najaf and Karbala helped alleviate some of the pain the Iranian nation is going through.

“Both the government and the people of Iraq have gotten past difficult days and I hope with the Iraqi government’s efforts, we will soon see more security, stability, and national unity in Iraq,” Rouhani said.

“We should act in a way that our enemies understand they can’t in any way disrupt ties between the two nations,” he added.

He referred to General Soleimani’s role in saving the strategic Iraqi city of Arbil from the Daesh terrorist group’s clutches and said the Iraqi nation is also mourning the Iranian commander.

Salih, for his part, condemned the US strike on Iraqi and Iranian commanders and described their assassination as a “great loss” for both nations.

He also doubled down on Baghdad’s willingness to widen ties with Tehran and said the two sides will be able to strengthen regional security together.

“I was hoping to have this conversation at a better time but we are all currently in a difficult situation,” he told Rouhani.

“We are all faced with a major conspiracy which I hope we can put behind through the wise leadership of the Islamic Republic and maintain peace and stability in the region.”