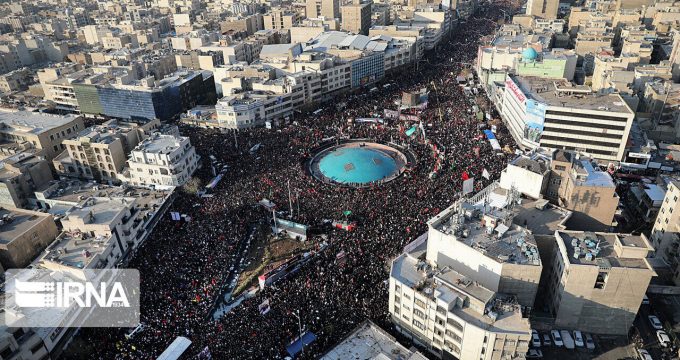 Quds Force Commander: We will take revenge of martyrs

IRNA – The new commander of Quds Force said the revenge for General Soleimani is a promise given by God and his martydom will be reciprocated by removing the US from the region.

Commander of the IRGC Quds Forces Brigadier General Esmail Ghaani said: “We promise to continue Martyr Soleimani’s path with the same strength and his martyrdom will be reciprocated in several steps by removing the US from the region.”

Ghaani added: “The continuance of this movement is to reach the global governance of Imam Mahdi (May God Hasten His Reappearance). This important goal will be attained under the Supreme Leader.”

“The revenge for Soleimani’s martyrdom is a promise given by God, as the God is the main avenger,” he said.

Lieutenant General Soleimani and the acting commander of the Iraqi Popular Mobilization Units (PMU) – known as the Hashd al-Shaabi – Abu Mahdi Al-Mohandes and their fellow combatants, separately leaving Baghdad airport in two cars, were targeted and assassinated on Friday at the direct order of US President Donald Trump.

The funeral ceremony of the martyrs was held in some Iraqi cities before they were taken to Ahvaz, Mashhad and Tehran so that millions of Iranians could pay their last respect to them.

The Supreme Leader of the Islamic Revolution Ayatollah Ali Khamenei commented on the martyrdom of the great commander of the IRGC’s Quds Forces and said harsh and severe revenge is awaiting the criminals.