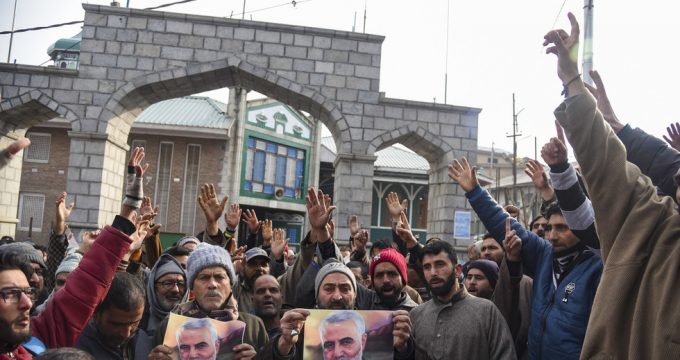 RT – The assassination of Iran’s elite Quds Force commander Qassem Soleimani in Baghdad has sparked an angry reaction among Shia Muslims – and India’s own community was no exception, taking to the streets to decry the US move.

The Quds Force chief was killed in a US airstrike alongside several other Iranian and Iraqi military commanders on the outskirts of the Iraqi capital on Thursday. While Washington – and Tel Aviv – claimed the killing was “defensive” in nature, it caused an explosive reaction across Iraq and Iran, with thousands strongly condemning the attack.

The assassination sparked protests in other countries as well, especially in those with sizable Shia Muslim populations. A handful of rallies were held in the Indian-controlled part of the disputed Kashmir region, where people flocked to the streets to voice their anger over the murder.

Hundreds of protesters also marched in the northern Indian town of Budgam, carrying portraits of Soleimani and chanting anti-American and anti-Israeli slogans.

“We will take revenge of their act so that they will bow down. And it is going to be a lesson for our future generations,” said an Islamic cleric who led the protests, while another scholar insisted that the US and Israel “will be destroyed very soon.”

A similar rally was held in the town of Kargil, where locals turned up in large numbers to mourn the death of the prominent Iranian commander. Footage from the scene shows residents carrying portraits of Soleimani and placards reading “Down with the USA.” Large banners portraying Iranian leaders could also be seen hanging from several buildings in the town.

People in Kargil protest against the killing of Iran’s Major General Qassem Soleimani in a US drone strike. Kargil is a Shia dominated district in Ladakh and has deep ties with Iran. Protestors marched with palcards which read ”down with USA”. #Iraq#Iran#Kargil#USA#Kashmirpic.twitter.com/H9y1u7yhTm