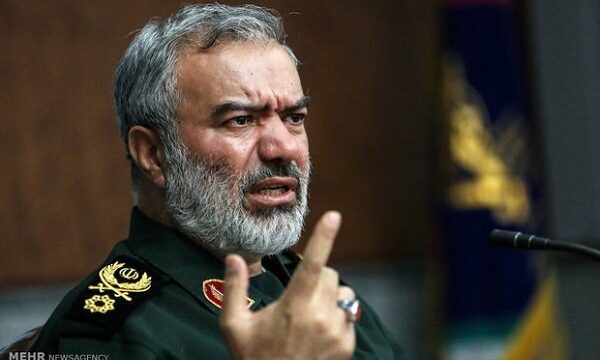 IRGC commander unveils details of US message to Iran after assassination of Gen. Soleimani

Tasnim – The Islamic Revolution Guards Corps deputy commander for coordination, Brigadier General Ali Fadavi, said that the US has asked Iran in a message to retaliate at the same level after assassination of IRGC Quds Force Commander Qassem Soleimani.

“The US operation (assassination of Gen. Soleimani) was not a complicated one in terms of military and technology capabilities, therefore it had no military value, and so we could also send our drones and target any moving targets with laser missiles,” Brigadier General Fadavi said in an interview with Iranian State TV on Friday.

Referring to Islamic Republic’s promise of harsh revenge for the assassination of General Qassem Soleimani, General Fadavi said, “Americans should wait for that hard revenge; which is not just up to Iran. It is true that Gen. Qassem was a member of the Islamic Revolution Guards, but the great front of the resistance is geographically ready to carry out this harsh revenge and it will certainly be done at the best of times and in the best way possible.”

“Although on Friday morning they resorted to diplomacy and even said that if you want to take revenge, do it in accordance with what we did, but they can’t determine anything,” the IRGC deputy commander for coordination, Brigadier Fadavi, added, referring to the US message to Iran after the martyrdom of Lieutenant General Soleimani.

A Swiss diplomat delivered a message from the United States to Iran on Friday over the US killing of senior Iranian military commander Qassem Soleimani, the Swiss foreign ministry said earlier.

“The chargé d’affaires was informed of Iran’s position and in turn delivered the message of the United States,” the ministry said in an emailed response to a Reuters query, without elaborating.

Switzerland represents the interests of the United States in Iran, allowing the two countries to maintain a diplomatic channel of communication.