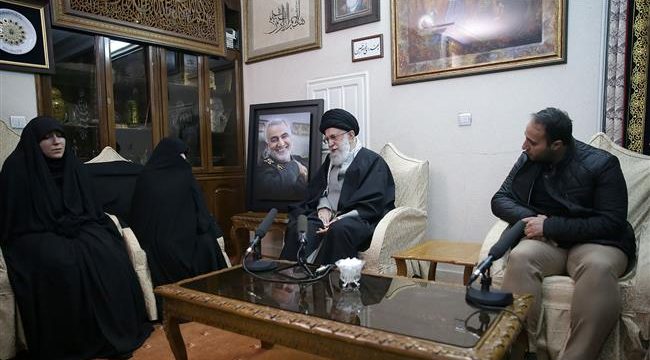 During the meeting on Friday, Ayatollah Khamenei expressed his condolences to Soleimani’s family over the assassination.

The Leader said Soleimani “had been faced with martyrdom several times but he feared no one and nothing” in the path of fulfilling his duties and fighting enemies.

Ayatollah Khamenei added that Soleimani was martyred by the “most vicious individuals in the world,” a clear reference to the White House tenants.

The Leader wished patience for Soleimani’s family and all Iranians and hailed the move by people who took to the streets in several cities across the country to express their anger and condolences over the assassination.

Iranian demonstrators, in their hundreds of thousands, called for revenge.

General Solemani along with Abu Mahdi al-Muhandis, the deputy chief of the Iraqi pro-government Popular Mobilization Units (PMU), were assassinated during the early hours of Friday. Four other Iranians and four other Iraqis in their company were also martyred.

In the capital Tehran, tens of thousands of people attending the Friday prayers held a rally after the event, carrying signs that warned the United States, Israel and their regional allies of harsh consequences.

Ayatollah Khamenei said the “cruelest people on earth” assassinated the “honorable” commander who “courageously fought for years against the evils and bandits of the world.”