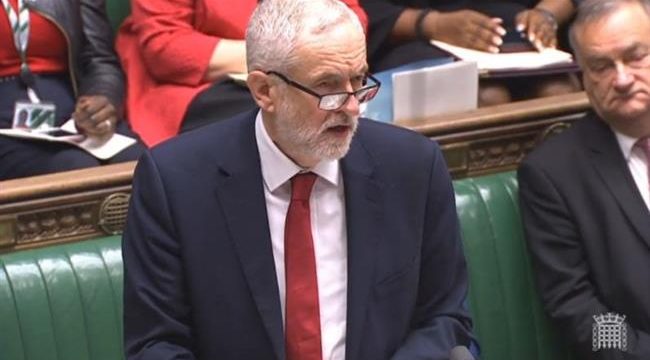 Corbyn: Assassination of Soleimani “extremely serious and dangerous escalation of conflict in the Middle East”

Press TV – Labour Leader, Jeremy Corbyn, on Friday, condemned the move by the US, saying: “The US assassination of Iranian general Qasem Soleimani is an extremely serious and dangerous escalation of conflict in the Middle East with global significance.

“The UK Government should urge restraint on the part of both Iran and the US, and stand up to the belligerent actions and rhetoric coming from the United States.

“All countries in the region and beyond should seek to ratchet down the tensions to avoid deepening conflict, which can only bring further misery to the region, 17 years on from the disastrous invasion of Iraq.”

He said: “We have always recognised the aggressive threat posed by the Iranian Quds force led by Qassem Soleimani. Following his death, we urge all parties to de-escalate. Further conflict is in none of our interests.”

After news of Soleimani’s death broke, Mr Trump, who will be Trump, tweeted an image of an American flag.

General Soleimani’s assassination marks an escalation of tensions between the US and Iran, which have been at breaking point since Donald Trump withdrew from the 2015 nuclear deal and imposed crippling sanctions on Tehran.

Iran has vowed “harsh retaliation” for the death.

An adviser to Iran’s President Hassan Rouhani said: “Trump through his gamble has dragged the US into the most dangerous situation in the region.

“Whoever put his foot beyond the red line should be ready to face its consequences.”

The US has claimed it killed Soleimani, who led Iran’s military operations in the Middle East, because, they alleged, he “was actively developing plans to attack American diplomats and service members in Iraq and throughout the region”.

They have also accused him of having approved the attacks on the US Embassy in Baghdad earlier this week.

In 2019 Tehran shot down a US military surveillance drone and seized oil tankers.

The US also blames Iran for a series of attacks targeting tankers, as well as a September assault on Saudi Arabia’s oil industry that temporarily halved its production.

Other labour MPs have also called for “engagement” rather than “escalation”.

A major Corbyn ally and candidate for Labour’s deputy leadership Mr Burgon said of the airstrike in Iraq – which Boris Johnson reportedly knew nothing about – on Friday: “Last year I warned that we needed to avoid the situation with Iran escalating further – and that a war on Iran could be even more dangerous than the war on Iraq.

“More than ever we need to avoid being the sidekick of Donald Trump. We need an international movement against war and for peace.”

He went on to add: “In increasingly dangerous times, it is vital our party plays its role in that movement. Since 2015, Labour has been led by someone who has given his all to that movement. Our party must continue its commitment to anti-war internationalism. It’s our duty.

“The first internationalist demonstration I went to was when I travelled down to London from Leeds for the February 2003 demonstration against the Iraq War. Speakers at that demonstration included Tony Benn and Jeremy Corbyn.

“We must keep their example of anti-war internationalism close to our hearts and alive in our party, society and world.”

Keir Starmer, labour Party leadership contender, MP for Holborn and St. Pancras, in a similar vein, said: “This is an extremely serious situation. There’s a clear danger of further violence and escalation in the Middle East. We need to engage, not isolate Iran. All sides need to de-escalate tensions and prevent further conflict.”

Tooting MP Rosena Allin-Khan said: “We’re only 48 hours into the New Decade and Trump already wants to drag the world back into a dirty war in the Middle East. The UK government must not allow this to escalate into a war with Iran – enough innocent lives have already been lost through bloody conflict in the region.”

Ilford North MP, Wes Streeting, a critic of Mr Corbyn, also said: “No one should mourn Qassem Soleimani, a man whose hands were soaked in blood. But this targeted assassination by the USA against a state actor risks escalating the conflict with Iran – apparently without thinking through the regional and global consequences. It is reckless.”