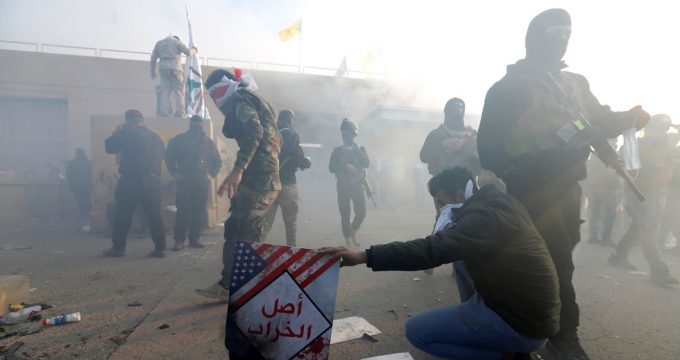 US troops deployed to Middle East after Baghdad embassy siege

The Guardian | Julian Borger: Up to 3,000 soldiers to be sent in as pro-Iran militants leave US embassy in Iraqi capital

Iranian-backed militants have ended a day-long siege of the American embassy in Baghdad following an order from their militia organisation, but the struggle between the US and Iran for influence in Iraq looked set to intensify further in 2020.

The US defence secretary, Mark Esper, announced that 750 airborne troops would be deployed to the region immediately, with more to follow in the next few days. Up to 3,000 soldiers are reportedly being prepared to move out to the Middle East, adding to the 14,000 sent there since May in an effort to counter Iran.

“This deployment is an appropriate and precautionary action taken in response to increased threat levels against US personnel and facilities, such as we witnessed in Baghdad today,” Esper said in a written statement. “The United States will protect our people and interests anywhere they are found around the world.”

Iraqi resistance group Kata'ib Hezbollah, US attack on Iraq PMF, US embassy in Baghdad, US troops in region January 2, 2020
UK says European partners try to make Iran benefit from JCPOA
Why Iraq is at the center of the dispute between Iran and the United States