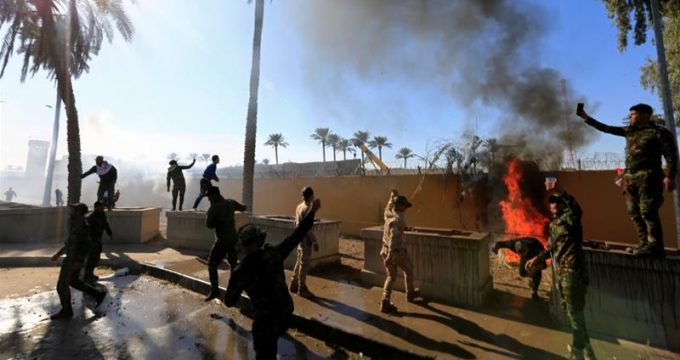 RT – Anti-American sentiment has taken deep root in Iraqi society and ultimately fueled the fiery siege of the US Embassy in Baghdad, as the locals blame Washington for the sorry state of Iraq, military and political analysts tell RT.

Chanting “Death to America” and “Death to Israel,” a crowd of protesters surrounded the US diplomatic mission on Tuesday, angered by the death of two dozen Iraqis in US airstrikes against the Iranian-backed Kataib Hezbollah militia over the weekend.

At one point, the mob set a checkpoint at the entrance on fire and attempted to storm the embassy. Dozens of people made it inside the heavily-guarded compound and delivered some damage to the property before eventually retreating as a force of US Marines backed by attack helicopters arrived as reinforcements.

What unfolded in Baghdad “of course, allows [us] to draw parallels” with the attacks on US diplomatic missions in Benghazi in 2012, Grigory Lukyanov, senior lecturer at the Moscow-based Higher School of Economics, told RT. Four Americans died in that attack, including Ambassador J. Christopher Stevens.

Lukyanov also drew comparisons with the seizure of the US embassy in Tehran, following the 1979 Iranian revolution, when 52 American diplomats and staff were held hostage for 444 days.

“There’s nothing surprising” about the embassy in Baghdad being targeted by protesters, Lukyanov pointed out. The US has been directly involved in Iraqi affairs since the invasion in 2003 and the locals now blame the “foreign sponsors” of the Iraqi government for its inability to improve their security and well-being.

The operation against backed Kataib Hezbollah, launched without any approval from Baghdad, became “yet another sign for the ‘Iraqi street’ that the Americans are behaving like occupiers,” he added. Iraqi Prime Minister Adel Abdel Mahdi called it an “an unacceptable vicious assault” and said the US had violated the sovereignty of his country.

“The level of anti-American sentiment is as high in Iraq as it was in Libya and Iran. It’s not something that’s fueled by some military or political entities,” Lukyanov told RT.

The US don’t want their long-established relations with Iraq to be held hostage by the ongoing unrest.

President Donald Trump declared the embassy safe on Tuesday afternoon and called the entire thing an “anti-Benghazi.” The embassy building itself wasn’t breached and would not be evacuated, a State Department spokesperson said.

“A full evacuation of the Embassy could be seen as severing all diplomatic ties, which is impossible” given the current level of US involvement in Iraq, Lukyanov noted. In addition to the embassy and other diplomatic offices, Washington has a major military presence on Iraqi soil, using it to project power in the region.

Sergey Balmasov of the Institute of the Middle East in Moscow, also believes that the withdrawal of the US from Iraq is unrealistic. Such a move would hurt President Donald Trump’s chances of reelection in 2020 and “lead to Iran strengthening its position in the region.”

Unrest in Baghdad could instead create a pretext for the Americans to increase their military presence in Iraq to put additional pressure on Tehran and Damascus, Balmasov told RT, adding, “I doubt that Trump will now send a massive 200,000 contingent into the country, which his predecessor Barack Obama earlier pulled out.”

While Trump noted that Iraqi security forces had rapidly responded to his request to help the embassy, earlier reports spoke of them letting the protesters through. Either way, the “the US-Iraqi relationship is further weakened by these events,” military analyst Scott Ritter pointed out.

The Iraqi opposition will now most likely “double down on its political pressure on the Iraqi government to evict US military forces from Iraqi soil,” Ritter told RT.