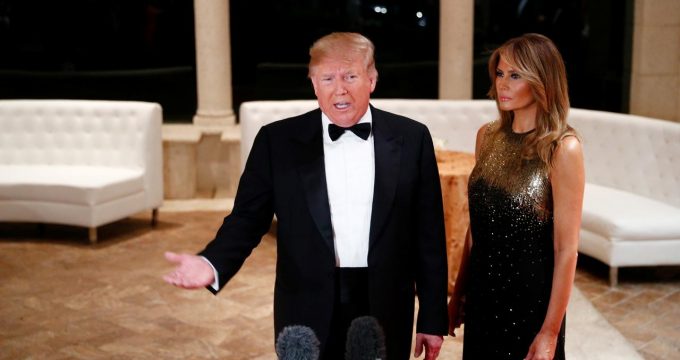 The New York Times | Michael Crowley and Edward Wong: Administration officials say they are restoring “deterrence” against Iran, but the president’s reluctance to use force in the Middle East may be creating an opening for Tehran.

President Trump toughened his rhetoric toward Iran on Tuesday, saying the country would “be held fully responsible” for the attack by Iraqi demonstrators on the United States Embassy compound in Baghdad, an assault that Mr. Trump said was directed by Tehran.

“This is not a Warning, it is a Threat. Happy New Year!” Mr. Trump wrote on Twitter on Tuesday evening, in some of his most bellicose language of the year toward Iran.

The growing crisis has strained Mr. Trump’s aversion to war with Iran as well as his distaste for Middle East entanglements generally, including in Iraq. Mr. Trump faced pressure from hawkish allies in Washington to confront Iran forcefully, while memories of the deadly attack on the American diplomatic compound in Benghazi, Libya, loomed over the administration.

Many analysts said Iran had thrown the Trump administration on its heels and was forcing a president entering his re-election year into unpalatable decisions about escalation and the risk of wider conflict.

By Michael Crowley and Edward Wong

WEST PALM BEACH, Fla. — President Trump toughened his rhetoric toward Iran on Tuesday, saying the country would “be held fully responsible” for the attack by Iraqi demonstrators on the United States Embassy compound in Baghdad, an assault that Mr. Trump said was directed by Tehran.

“This is not a Warning, it is a Threat. Happy New Year!” Mr. Trump wrote on Twitter on Tuesday evening, in some of his most bellicose language of the year toward Iran.

The growing crisis has strained Mr. Trump’s aversion to war with Iran as well as his distaste for Middle East entanglements generally, including in Iraq. Mr. Trump faced pressure from hawkish allies in Washington to confront Iran forcefully, while memories of the deadly attack on the American diplomatic compound in Benghazi, Libya, loomed over the administration.

Many analysts said Iran had thrown the Trump administration on its heels and was forcing a president entering his re-election year into unpalatable decisions about escalation and the risk of wider conflict.

“The Iranians believe Trump has shown he doesn’t want to go to war,” said Vali Nasr, a former State Department official in the Obama administration and a professor at the Johns Hopkins University School of Advanced International Studies. Mr. Nasr said that Iran’s leaders were “making the president realize there is risk and cost to his policy” of crippling sanctions on the country’s economy.

The siege on the embassy created an unwelcome holiday crisis for Mr. Trump, who has spent the past week out of sight, splitting time between his Mar-a-Lago resort estate in Florida and his luxury golf club a few miles away. Mr. Trump has not spoken to reporters since Christmas Eve and was absent from a Sunday evening news briefing at Mar-a-Lago during which three of his top national security officials discussed American airstrikes against an Iranian-backed Iraqi militia.

But on Tuesday the White House said Mr. Trump spoke by telephone with Iraq’s prime minister, Adel Abdul Mahdi, imploring him to help protect Americans in the country.

Although Iraq has seen mass anti-government protests in recent months, Mr. Trump left no doubt that he viewed the embassy assault as Tehran’s handiwork. “Iran is orchestrating an attack on the U.S. Embassy in Iraq,” he tweeted. “They will be held fully responsible.” Mr. Trump also ordered a contingent of Marines to protect the American personnel there.

No Americans were harmed in the assault on the compound, and the attackers did not enter any embassy buildings. But the Trump administration was treating the threat as a serious new escalation by Iran, two days after Mr. Trump approved the airstrikes against the militia group that American officials said launched a rocket attack on an Iraqi military base that killed an American contractor and wounded four American soldiers.

The events of the past several days amount to a violent cat-and-mouse game between Washington and Tehran, as Iran bridles under economic sanctions and seeks to exact a price from the United States. Those sanctions contributed to mass protests that the country’s leaders say were instigated by the United States to bring down Iran’s regime.

Trump administration officials, particularly Secretary of State Mike Pompeo, have long spoken about the need to “restore deterrence” against Iran to check its military activities in the Middle East. They blame President Barack Obama for emboldening Tehran through the 2015 nuclear deal. But supporters of the agreement say that Mr. Trump’s May 2018 withdrawal from it prompted Iran and its proxies to adopt a more aggressive posture toward the United States.

Meanwhile, some of Mr. Trump’s allies fear that a president who has repeatedly called for winding down “endless wars” has effectively condoned Iranian behavior by shying away from military force. In mid-June, Mr. Trump ordered limited airstrikes to punish Iran for shooting down an expensive American drone near its coastline, only to call off the attack at the last minute. Mr. Trump also defied calls from some Republican supporters to strike at Iran after it attacked a major Saudi oil production facility in September.

Mr. Trump has also said he would like to negotiate a new nuclear agreement with Iran’s leaders. But Iran has refused to discuss its nuclear program until Mr. Trump rolls back economic sanctions, including on oil exports, a step the president has refused to take.

Mr. Trump was cheered on by some Republican allies on Tuesday, including Senator Lindsey Graham of South Carolina, a longtime advocate of confrontation with Iran who golfed with the president in Florida on Tuesday.

Mr. Graham praised Mr. Trump on Twitter for “acting decisively” and told Iran that the president “will hold you accountable for threats against Americans and hit you where it hurts the most.” He also issued a veiled threat of further military action, telling the Iranian government that “a country that depends on the ability to refine oil for its existence needs to be cautious.”

Complicating the picture was what a senior Trump administration official, who spoke on the condition of anonymity on Monday, cast as longtime frustration with the Iraqi government, saying it has not sufficiently protected American military and diplomatic personnel from Iranian-backed militia groups. About 5,000 American troops and several thousand more civilians remain in Iraq nearly a decade after the United States officially ended its occupation of the country.

Mr. Trump has repeatedly criticized the 2003 American invasion of the country as a colossal mistake and has been eager to withdraw American forces from neighboring Syria.

Mr. Trump tweeted on Tuesday that “we expect Iraq to use its forces to protect the Embassy, and so notified!”

But much of Iraq’s political establishment has bitterly complained about the American airstrikes within its borders. The strikes hit Shiite militia fighters who, while aligned with Iran, helped to defend Iraq from the Islamic State in recent years and have close ties to the country’s leadership.

“The story in Iraq has shifted,” Mr. Nasr said, as prior anger at Iranian influence in the country is displaced by outrage at Washington. “I think the administration has miscalculated.”

On Tuesday, Mr. Trump tried to keep the focus on Iranian influence in Baghdad.

“To those many millions of people in Iraq who want freedom and who don’t want to be dominated and controlled by Iran, this is your time!” Mr. Trump implored on Twitter as demonstrators set up camp at the gates of the American Embassy in Iraq’s capital.

“The attack on the U.S. embassy in Baghdad is straight from Iran’s playbook in 1979,” Mr. Bolton wrote. “It’s a sign of Iranian control over Shia militia groups, not a sign of Iraqi anti-Americanism.”

Some foreign policy analysts said the fast-moving crisis pointed to muddled thinking within the Trump administration about its approach toward Iran.

“Trump, who would just as soon withdraw wholesale from Iraq, faces a conundrum in an election year: How to avoid looking weak on the one hand and yet avoid triggering a messy conflict with Iran and deeper involvement in Iraq on the other that will alienate his base and energize his opponents,” said Aaron David Miller, a former State Department official and Middle East expert at the Carnegie Endowment for International Peace.

Mr. Trump’s public pledges to disentangle the United States from wars in the Middle East are more complicated and problematic than they appear, former officials and analysts said. While the president has talked about withdrawing American troops, he has actually added troops in some areas, most notably about 3,000 to Saudi Arabia in an order issued in October. The key factor there was Saudi Arabia’s willingness to pay the costs of maintaining the troops, a persistent issue with Mr. Trump.

Mr. Trump has signaled a strong distaste for engagement in foreign conflicts in nearby Syria. He surprised top advisers by withdrawing American troops from the Syria-Turkey border in October and allowing Turkey to invade a Kurdish-held area in Syria. Mr. Trump eventually agreed to keep some troops by oil fields in Syria after senior Defense Department officials stressed to Mr. Trump that the soldiers would be securing oil.

The president announced in December 2018 that he planned to withdraw troops from Syria, prompting the resignations of Defense Secretary Jim Mattis, a veteran Marine general, and Brett H. McGurk, the special presidential envoy to the international coalition battling the Islamic State.

On Tuesday morning, the State Department said Mr. Pompeo had spoken with Mr. Mahdi, and Iraq’s president, Barham Salih, in separate calls. A summary of the calls released by the department said that Mr. Pompeo “made clear the United States will protect and defend its people, who are there to support a sovereign and independent Iraq,” and that the Iraqi leaders “assured the secretary that they took seriously their responsibility for and would guarantee the safety and security of U.S. personnel and property.”

The safety of embassy employees is fraught for Mr. Pompeo. He delivered blistering criticism of Secretary of State Hillary Clinton when he was a member of the House Select Committee on Benghazi, which investigated the decisions she made around the 2012 attack on the diplomatic compound in Libya. Ambassador J. Christopher Stevens; another full-time government employee, Sean Smith; and two American C.I.A. contractors died in that attack.

Former State Department officials and associates of Mr. Pompeo say because of that history and the ensuing harm to Mrs. Clinton’s political career, he is keen to ensure that American diplomats under his watch are not harmed. Republican politicians say that Mr. Pompeo might run for an open Senate seat in Kansas in 2020 and then president in 2024.

That history was clearly on the mind of the president himself. By late Tuesday afternoon, with embassy security beefed up and the imminent threat seemingly repelled, Mr. Trump boastfully tweeted: “The Anti-Benghazi!”

In May, during a period of heightened tensions with Iran, Mr. Pompeo ordered most non-Iraqi employees of the Baghdad embassy and the consulate in Erbil, in northern Iraq, to leave the country. Employee numbers at the embassy are now much lower than they were before that order, American officials say. In September 2018, Mr. Pompeo ordered the closing of the Basra consulate, despite the opposition of the top diplomat there.

In response to the turmoil in Baghdad on Tuesday, the American military conducted a show of force with helicopter gunships and deployed about 120 Marines to reinforce the compound’s grounds, a Defense Department official said. Defense Secretary Mark T. Esper also said that about 750 soldiers would be sent to the region immediately, and that additional troops were prepared to follow in the coming days.

Mr. Esper called the deployments “an appropriate and precautionary action,” adding, “The United States will protect our people and interests anywhere they are found around the world.”