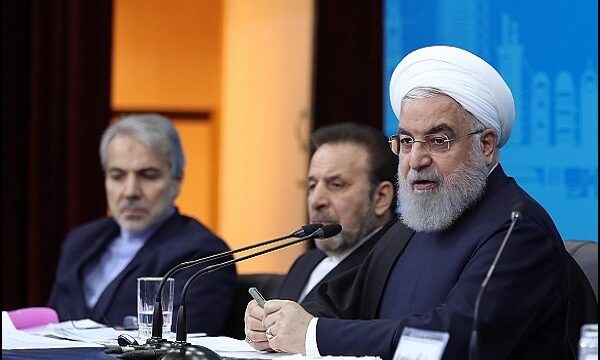 MNA – Iranian President Hassan Rouhani said that the Islamic Republic of Iran has established amicable and intimate relations with 12 neighboring countries and hoping that the remaining two neighboring states would resume their ties with Iran.

He made the remarks late on Wed. in Administrative Council session in Ardabil province, adding that “Iran has established very intimate, amicable and friendly ties with the northern neighbor of this province i.e. the Azerbaijan Republic and the two countries of Iran and Azerbaijan are determined to broaden and enhance their bilateral relations.”

Rouhani stated, “Iran and the Republic of Azerbaijan have several big economic projects, including the creation of joint industrial parks, which can make a big development in this province.”

Referring to the Rasht-Astara railway project as another joint project of Iran and the Republic of Azerbaijan, he said, “the Islamic Republic of Iran has very good relations with most of its neighbours, including Russia, Azerbaijan, Turkey, Iraq and other countries.”

“We have 15 neighbours who have good relations with us except for one or two neighbours, which I hope they will join us.”

“The government is responsible to provide infrastructures, and one of these infrastructures is establishing good relations with neighbouring and regional states,” he said.

Referring to his recent visit to Malaysia and attending the quadripartite summit with Qatar, Turkey, and Malaysia, the President said, “at the summit, good agreements were reached between the four countries, which provides infrastructure and could bring about economic development to the countries.”

“If we were in normal conditions without sanctions imposed on us, we would have at least $60 billion in oil revenues this year; therefore, the government is under pressure,” President office’s website quoted him as saying.

Stressing that both the nation and the government must work together to overcome these difficult conditions, the president said, “we must either resist the enemies or we must give the most precious diamond in our country which is independence, democracy, Islam, the republic, our national interest and our national security to the enemy.”

Stating that, “I am not a person to lose any chance,” he said, “if all our principles are respected, I will hold a meeting and negotiate, as we have done before. We are not to blame for today’s conditions and we have not violated our commitments. We have not lied to our people and the world. Today, an administration has taken office that is not committed to any agreement and it has even violated commitments with its own friends; it has violated international treaties and withdrawn from international contracts. It bestows a country’s land to the usurper.”

The President said, “we are in a situation where there is no way other than unity. The more the enemies see that we are united and we love each other and we are together, the more they become frustrated.”

“The Constitution is the legal charter and national covenant for all of us. We all have to move within that framework, and there is no other way.”

“Have no doubt that the enemies who wanted to bring our nation to its knees in the year 1397 are disappointed today. They make suggestions for negotiation, and whenever we see that the interests and rights of the nation are being met, we will not hesitate to solve the problems of the people,” he added.