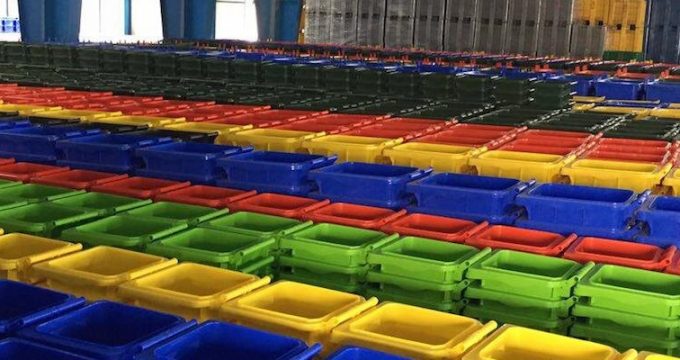 Iranian garbage can found as US embassy in Baghdad stormed

Bourse and Bazaar | Esfandyar Batmanghelidj:  One day after a deadly US airstrike which killed 25 militiamen, members of several Iraqi paramilitary groups aligned with Iran marched on the U.S. embassy in Baghdad, breaching the outer wall of the compound, which is set behind multiple checkpoints in the heavily guarded Green Zone.

Facing no resistance from Iraq’s security forces, the protestors moved on the embassy, risking further escalation between the United States and Iran days after the death of an American contractor in a rocket attack linked to the Kataib Hezbollah militia. U.S. President Donald Trump warned in a tweet that Iran would “be held fully responsible” for the attack on the U.S. embassy, although he later told reporters that he did not expect a war.

The day’s events produced many surreal scenes, but perhaps none more so than that captured in a video shared widely on social media. The short clip shows a green plastic garbage can, which protestors had recognized as an Iranian-made product. Several men can be heard laughing as they remark on the irony of finding an Iranian garbage can in use behind the walls of the U.S. embassy.

The otherwise unremarkable garbage can may offer a metaphor for the senseless contest between the United States and Iran for political and military influence in Iraq. The fact that the U.S. embassy is using Iranian garbage cans serves as a reminder that basic economic logic can still override the competition that has so frustrated the Iraqi people by stymying development and stoking violence.

A logo visible in the video, written in Persian, indicates the garbage can was manufactured by Razak Chemie. The company, also known as Razak Plast, specializes in the production of plastic garbage cans and dumpsters. Based in Tehran, Razak Chemie, exports to a wide range of markets, including Iraq. It is part of Iran’s large and well-developed manufacturing base, which converts the country’s natural resources—in this case the petrochemical derivatives of oil production—into higher value finished goods.

It is likely that the contractor responsible for sanitation services at the U.S. embassy compound purchased the garbage can from a local wholesaler—perhaps even a local subsidiary of Razak Chemie. A product like a garbage can is exempt from sectoral sanctions on Iran, and Razak Chemie is not a sanctioned entity. It may not have occurred to anyway to check the origin of the garbage can—certainly no one would have anticipated the garbage can would feature in a video shot by Kataib Hezbollah members behind the embassy walls.

Economically speaking, it makes perfect sense that the U.S. embassy in Baghdad would use Iranian garbage cans, potentially in addition to other Iranian products. As one of Iraq’s largest trading partners and—along with Turkey— the neighbor with the largest manufacturing base, Iran is an obvious supplier for a wide range of consumer and industrial goods.

Sure, the contractor at the U.S. embassy could have sourced the same kind of garbage cans from China. But it is likely that Razak Chemie’s products were simply more affordable and more readily available than those from other companies and countries.

A Chinese-made garbage can sold in Iraq would have to travel a long way. It would also likely be produced with plastic pellets imported from abroad—very possibly from Iran itself. Between January and November 2019, China imported USD 2.3 billion of plastics from Iran, a category which includes the raw materials necessary for injection molding of industrial garbage cans. Given Razak Chemie can source key raw materials domestically and can get its products to Baghdad via a simple 11-hour journey by truck, cost-competitiveness is to be expected.

A similar business case applies to a wide range of Iranian manufactured goods now exported to Iraq. Last year, Iran-Iraq bilateral trade amounted to USD 12 billion. When Iranian President Hassan Rouhani visited Baghdad in April of this year, he announced an ambitious goal to grow that figure to USD 20 billion by 2021. By comparison, in 2018, U.S.-Iraq bilateral trade was just over USD 13 billion. However, of that amount nearly USD 12 billion was exports of Iraqi crude oil to the United States. In short, the U.S. is not selling basic products like garbage cans to Iraq—and those products, when not manufactured domestically in Iraq, are frequently sourced from Iran over other global suppliers.

Whatever vision policymakers in Washington may have for economic development in Iraq, it will require the respect for Iraq’s deep economic ties with Iran and the utility of those ties. Of course, in the interests of Iraq’s economic sovereignty and development, these ties ought to be based on fair competition and competitive advantages. Ideally, more of Iraq’s consumables will one day be made domestically, but perhaps it will be through joint ventures in which an experienced firms like Razak invest in Iraqi manufacturing. Already, several major Iranian companies have established local manufacturing plants in Iraq, contributing much-needed foreign direct investment and transferring technological knowhow while also creating jobs.

Iran-backed militias may have made it behind the walls of the U.S. embassy, but Razak Chemie’s garbage can made it there first—unthreateningly and usefully. The United States can no more expect to excise Iranian commercial activity from the Iraqi economy than it can expect to end German commercial activity in Poland—economic development necessitates regional integration.