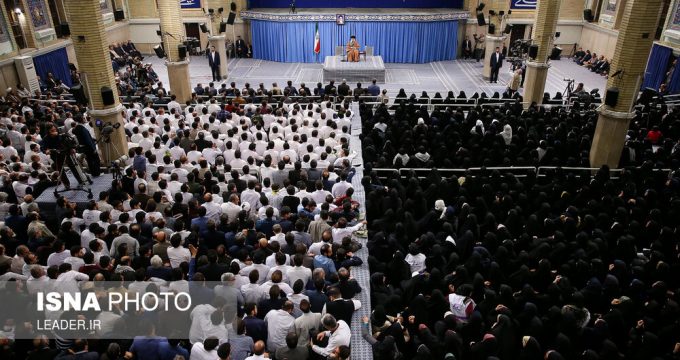 Press TV – Leader of the Islamic Revolution Ayatollah Seyyed Ali Khamenei has strongly condemned the deadly American air raids that targeted the positions of Iraq’s Hashd al-Sha’abi forces, saying Washington is in fact taking revenge on the popular forces because of the key role they played in defeating the Daesh terror group.

The Leader made the remarks in reference to the latest US military aggression, which has drawn a wave of damning reactions from officials and movements across the region, and triggered furious public protests outside the US Embassy compound in Baghdad on Tuesday.

As many as 31 fighters from the popular forces lost their lives and dozens more sustained injuries in the US airstrikes that targeted their bases in Anbar Province, in western Iraq, near Syria’s border, late Sunday.

Ayatollah Khamenei further responded to a tweet by Donald Trump, in which the US president threatened that “Iran will be held fully responsible for lives lost, or damage incurred, at any of our facilities. They will pay a very BIG PRICE!”

“For one thing, you are damned wrong because this matter has nothing to do with Iran. And for another, you ought to be reasonable and try to understand what the root causes of these incidents are,” adding, however, that the Americans are far from being sensible.

“The Americans must realize how the regional people, including those in Iraq and Afghanistan, hate them for the crimes they have perpetrated, and that this hatred would eventually seep out somewhere,” Ayatollah Khamenei pointed out.

The Leader went on to say, “If Iran decides to confront a country, it will do so openly. But everyone must know that we are strongly committed to the country’s interests and the Iranian nation’s dignity, grandeur and progress, and we shall not hesitate to intervene and deal a blow to any party who attempts to pose a threat to the country.”

Ayatollah Khamenei described the Iranian nation as being “courageous, vigilant and ready for action on all fronts.”

“Contrary to certain propositions that a war would break out, we shall never drive the country in the direction of war. However, if others attempt to impose anything on our country, we shall stand against them with all our might.”

The Leader provided examples of US misbehavior, which have given rise to widespread anti-American sentiment and anger in the region, including the atrocities committed by infamous private military company Blackwater in Iraq and Afghanistan as well as the massacre of thousands of Iraqi civilians and scientists.

Ayatollah Khamenei also pointed to the visits paid by American officials to certain regional states without advance notice or proper authorization from the relevant governments as an example of the US disdainful behavior towards regional nations.

Ayatollah Khamenei also commented on the violent riots that hit several Iranian cities in mid-November on the back of a series of popular protests over a government decision to increase fuel prices.

The Leader said the people had some demands, but that the enemy quickly intervened to take advantage of those demands and commit acts of vandalism.

The people’s vigilance came to light when they broke ranks with the rioters, who were trying to hide behind ordinary protesters.

“The main culprits of the mid-November riots and the attacks on infrastructure such as gasoline storage sites, wheat warehouses and public property were linked to foreign intelligence agencies,” Ayatollah Khamenei said.

On the first day of the riots, the Leader added, the Americans jumped for joy, but they became disappointed shortly afterwards as the riots came to end and they failed to achieve what they wanted.