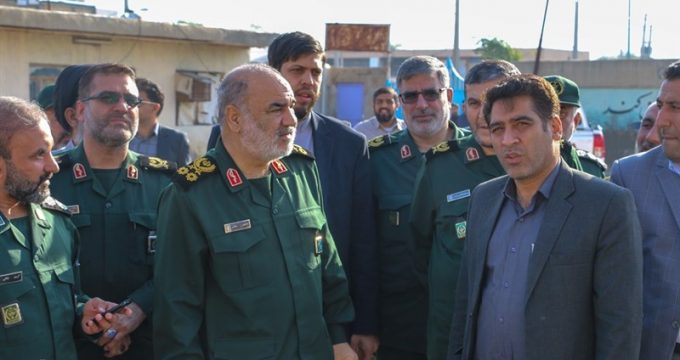 Tasnim – The Islamic Revolution Guards Corps (IRGC) inaugurated more than 2,600 development projects with the aim of alleviating deprivation in villages of the southwestern province of Khuzestan.

During a visit to Khuzestan on Wednesday, IRGC Commander Major General Hossein Salami inaugurated 2,640 projects aimed at alleviating deprivation in the province.

These projects include construction and equipping of rural houses, mosques, health centers, and cultural and sports places.

The launch of some other projects aimed at helping to boost employment and resistance economy was also among the objectives of Major General Salam’s visit to Khuzestan.

The IRGC has carried out extensive plans in recent years for the development of border provinces and underprivileged areas, such as in the southeastern province of Sistan and Balouchestan.

IRGC forces have been also actively involved in rescue and relief operations in natural disasters across Iran.

In November, a senior IRGC commander in the western province of Kurdistan said the IRGC and the Basij (Mobilization) forces are implementing more than 3,500 development projects in deprived areas of the province.