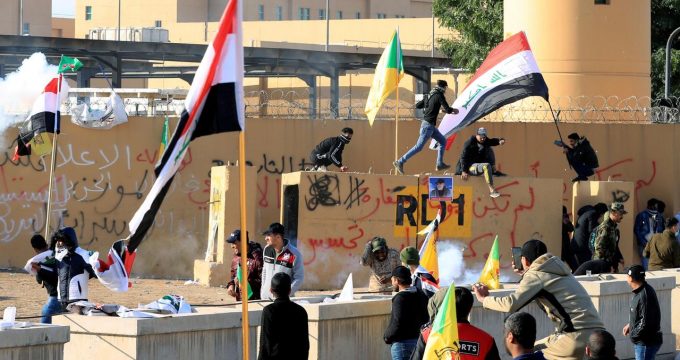 Iraq riots expose an America weaker and with fewer options

The Guardian | Julian Borger: Mobbing of US embassy after US strikes on state-sanctioned militia show America’s plan of maximum pressure only added to chaos

The mobbing of a US embassy has historically served as an emblem of America in decline, so the scenes around the embattled mission in Baghdad are a fitting end to the decade.

Tuesday’s events are not quite as decisive as the 1975 helicopter evacuation of the embassy in Saigon, or the seizure of the Tehran embassy four years later. Iraqi forces did turn up eventually to protect the Baghdad mission. It turned out the ambassador was on holiday anyway, so he did not have to endure the humiliation of a rooftop escape. But the demonstration of US weakness, after spending $2tn in Iraq, was plain for all to see.

The rioters, organised by Kata’ib Hezbollah (KH), brushed past Iraqi checkpoints, and there were members of parliament from the government bloc among them. Security forces who have had no compunction about firing tear gas canisters into the skulls of anti-Iranian protesters on Tahrir Square, stood by and watched molotov cocktails thrown at the US embassy. In its public pronouncements, the Iraqis put more blame on Washington than Tehran.