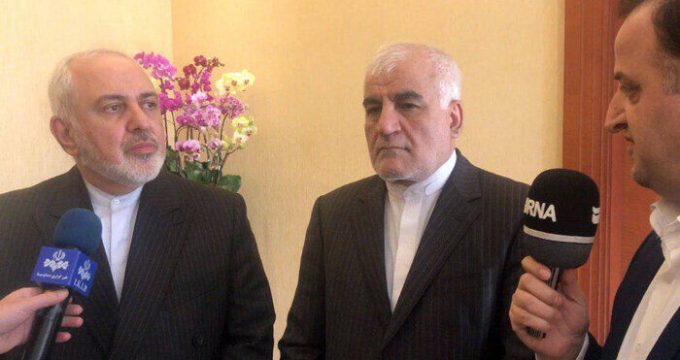 IRNA — Iranian Foreign Minister Mohammad Javad Zarif said on Tuesday that it is unlikely for the EU states to withdraw from the Joint Comprehensive Plan of Action.

He made the remarks in response to IRNA reporter in Beijing about rumors about the EU withdrawal from the JCPOA.

Asked about Iran’s next step to reduce Iran’s commitments to the JCPOA, Zarif said that the Chinese and Russian partners are unanimous that US withdrawal from the JCPOA and its sabotage of cooperation of the other states parties to the JCPOA have put the JCPOA at jeopardy.

“Unfortunately, Europeans have not been able to take action independent of the United States over the past several years,” he said.

Zarif highlighted reversibility of Iran’s steps to reduce its commitments, saying, “if we see practical action by EU to fulfill their commitments, we would be prepared to do so and gradually go back.”

Zarif referred to Russia and China as Iran’s two closest political and strategic partners, saying that due to bilateral, regional and international cooperation among the three countries, there should be regular consultations.

“Today and yesterday, we discussed with the Chinese and Russian foreign ministers about the unlawful unilateral measures of the United States and ways to counter US illegal practices.”

He said that talks with the Chinese and Russian officials focused on the need to secure the region, adding that the region needs cooperation to ensure peace and security, not in the form of dangerous military alliances.

Zarif said that he raised the issue of Afghanistan in the meeting with his Chinese and Russian counterparts, adding that during the meetings US and Western intervention in countries was also discussed and the need to unravel their political goals.

The Iranian Foreign Minister said that the talks also focused on the implementation of the policies of the Iranian, Russian, Iranian and Chinese leaders on bilateral relations.

Opposition to US unilateralism, the message of joint China, Iran and Russia Navy drills

In another part of his speech, the Iranian Foreign Minister said that the message of Iran, China, and Russia is opposing the US unilateralism.

He said that the world countries do not believe in dangerous military coalitions, but, cooperation. The agenda of all the countries concerned should be to ensure security.

Zarif pointed out that you cannot create a coalition against one of the countries in the region, but that all countries must cooperate and that cooperation should replace the conflict.