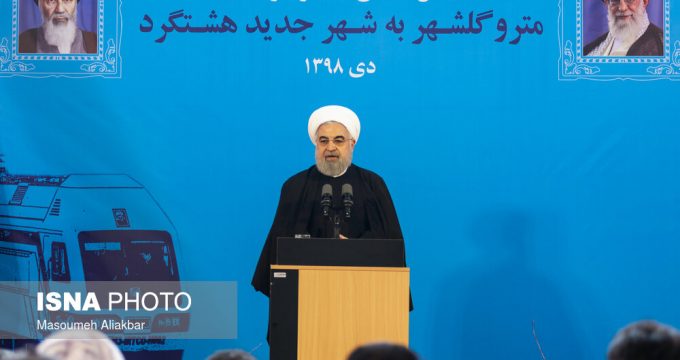 Radio Farda – Iran’s President Hassan Rouhani has said that Iran has lost $200 billion during the past two years as a result of U.S. sanctions.

However, he said he was running the country’s economy without that $200 billion.

Speaking while launching a railway project in Golshahr near Tehran on Tuesday January 31, Rouhani said: “Iran would have earned $200 billion surplus income since 2016 if the country was not involved in an economic war.”

The United States imposed crippling economic sanctions on Iran in 2018 and 2019, after it decided to withdraw from the 2015 Iran nuclear deal, known as JCPOA, asking for a stronger agreement and a change in Iran’s behavior in the region.

Iran has lost 90 percent of its oil exports; a cash lifeline for the government and the economy. Its currency has fallen fourfold in the past two years and annual inflation has surpassed 40 percent.

Rouhani questioned the argument of hardliner who say the sanctions have not affected Iran and criticized them for calling for the strengthening of “sanction management”, as a way out of the dire situation, without making any political concessions to the United States.

“What should we do? When there is no food and water, you are still in danger no matter how strong you are,” he said.

Elsewhere in his speech Rouhani spoke about Iran’s joint naval exercise with China and Russia in the Sea of Oman last week and said: “The plundering world is angry about this exercise in the same way they become angry when they see millions of Iranians take to the streets to support the political system.”

Rouhani made the comment a few weeks after millions of Iranians protested against economic hardships, inequality, financial corruption and discrimination following a gas price hike in November.