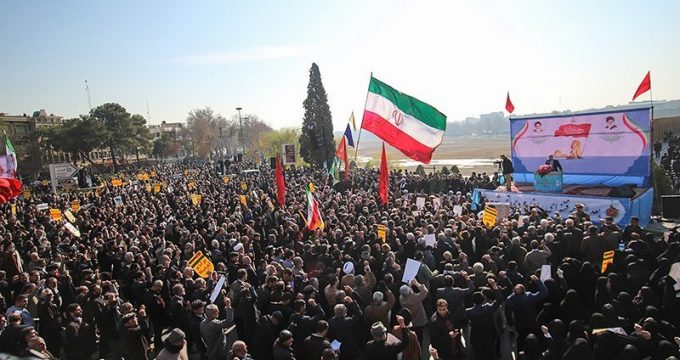 MNA – Millions of Iranians have taken to the streets to mark the anniversary of 2009 historic rallies, during which people renewed their allegiance to the Islamic establishment and put an end to foreign-orchestrated riots.

On Monday, people from all walks of life took part in nationwide demonstrations to mark the “Dey 9 epic” which refers to the mass rallies held on the ninth day of the Persian calendar month of Dey.

On this day in 2009, millions of Iranians rallied in the capital Tehran and other cities to end what the Iranian authorities described as “sedition” which had been going on for months following presidential elections earlier that year.

People were especially incensed by the incidents that occurred days earlier in Tehran, where a group of rioters engaged in blaspheming Ashura, the martyrdom anniversary of Imam Hussein, the third Shia Imam.

The unrest in 2009 was orchestrated by two of the candidates who had lost the election, claiming that the results had been rigged. Both remain under house arrest on charges of provoking the public and harming the national security.