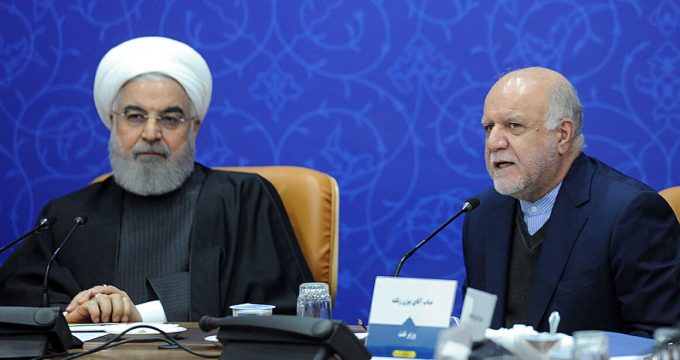 SHANA – Iranian Minister of Petroleum Bijan Zangeneh said that the development of petrochemical plants was in line with the policies of the Islamic establishment of Iran to create jobs and prevent sale of crude oil and gas.

Speaking on Monday during a meeting of Iranian President Hassan Rouhani with petrochemical industrialists on the occasion of the Petrochemical Industry Day, Zangeneh said, “The petrochemical industry has been well on its way to materializing these policies. Launching every petrochemical plant helps progress of downstream industries while generating thousands of jobs and becoming a source of hope and development.”

He further said Iran’s petrochemical production capacity was expected to reach 100 mt/y by 2021 from currently around 54 mt/y, and said the country would reap a total of $25 billion in petrochemical revenues by the year, almost twice as much as current figures.

Bijan Zangeneh said that the Rouhani administration had set the ground for realization of the second and third petrochemical leaps of the industry in Iran.

“The third leap is to plant the seeds of production for the future, not only the future of the petrochemical industry, but also the future of Iran’s non-oil economy and further prevention of crude oil sales,” he said.

Referring to favorable feedstock supply for petrochemical plants in recent years, the Iranian Minister of Petroleum said: “Thanks to the development of South Pars gas field and other projects, as well as supply of more feedstock from petrochemical complexes, production has increased in the industry and is acceptable despite the sanctions.”

He also underlined the fact that there were no gas supply cuts in the petrochemical sector in the winter.

Zangeneh also pointed to the Ministry of Petroleum’s projects that are exclusively aimed at supplying petrochemical feedstock such as Bidboland, NGL 3200, NGL 3100, Khark NGL, etc., and said: “Completion and launching these projects will supply a significant source of feedstock besides South Pars for petrochemical plants, besides collecting associated petroleum gas (APG).”

According to him, the Persian Gulf Petrochemical Industries Company (PGPIC) and Maroon Petrochemical Company had closed ranks to bankroll a major project to collect all the APG in the southwestern province of Khuzestan, adding the trend would also be continued in other operational districts like Khark, etc.