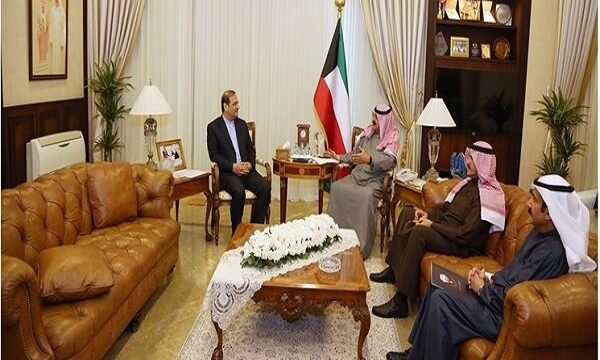 MNA – Iran’s Ambassador to Kuwait Mohammad Irani met and held talks with the Deputy Minister of Foreign Affairs of the State of Kuwait Khalid Al-Jarallah on bilateral relations.

Two sides discussed bilateral relations between Iran and Kuwait and the issue related to a recent anti-Iran meeting between some Kuwaiti officials and a representative of a separatist group.

Al-Jarallah affirmed Kuwait’s foreign policy principles are based on respecting the sovereignty of states and non-interference in the internal affairs of the countries.

Holding such meetings were done personally without the consent of the relevant authorities, he said, adding that the relevant bodies have begun to take legal action in this regard.

He also emphasized Kuwait’s respect for the sovereignty of the Islamic Republic of Iran and its territorial integrity, including Ahvaz.

Iran’s Foreign Ministry on Saturday summoned Kuwait’s charge d’affaires on Saturday to receive Iran’s strong protest against the anti-Iran session in the Arab country which was held between Kuwaiti officials and a representative of a terrorist group that pursues separatist goals.

The Foreign Ministry reminded the Kuwaiti official that such moves show a blatant interference in the Islamic Republic’s internal affairs and are a clear violation of the amicable ties between the two neighboring countries.