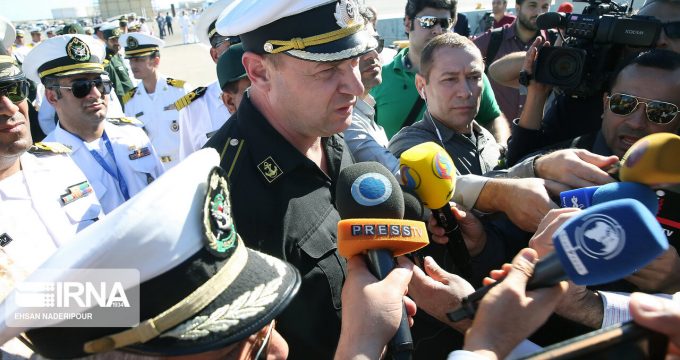 Speaking to reporters upon his arrival in Chabahar Port, southeastern Iran, Russian Naval Commander Alexander Mashinsky said, “This joint exercise will show that we can enhance the security of the region.”

He added that it is very likely that similar joint military exercises will take place in the future, saying that the three countries would certainly have another joint exercise.

The commander described the transfer of experience among the navies of the three countries as one of the principal goals of the exercise, stating “We would assess and evaluate the capability of the troops participating in the joint exercise.”

The top Russian Commander concluded by saying “Understanding the conditions of the region and the peripheral conditions of Iran, we have sent this naval fleet to the region.”

Iran, Russia and China commenced a four-day joint maritime drill in the Indian Ocean and the Sea of Oman area on Friday.

The maneuver, codenamed “Marine Security Belt,” is aimed at promoting the security of international trade in the strategic regions, as well as sharing experience in maritime rescue operations.

The joint drill, which is the first of such cooperation with Iran since the 1979 victory of Iran’s Islamic Revolution, comes amid US efforts to woo countries into a maritime coalition for patrols in the Persian Gulf, which have received a lukewarm welcome from its allies.