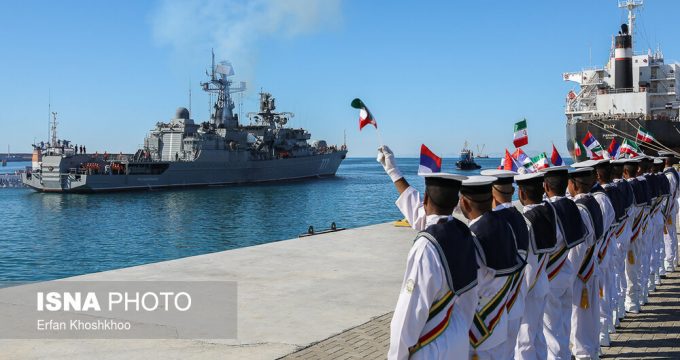 MNA – A Moscow-based American political analyst, Andrew Korybko, believes that the joint Chinese-Iranian-Russian naval drills currently underway in the northern Indian Ocean are an exercise of “military diplomacy,” aimed at supporting the regional balance of power.

In an article published by People’s Daily, the largest newspaper group in China, a Moscow-based American political analyst, Andrew Korybko, wrote that the alarmist reaction of Western mainstream media about the joint Chinese-Iranian-Russian naval drills, which is currently underway in the northern Indian Ocean, is mistaken.

Some forces have a vested interest in portraying these countries’ entirely normal military cooperation as a threat to the regional peace, he wrote, adding that “the whole point of the drill is to support the regional balance of power in order to facilitate a political resolution to the pertinent countries’ dispute,” in reference to the current tension between Iran, Saudi Arabia and the US, which is trying to create a maritime coalition in the region to undermine Iran.

“Some have publicly speculated that China and Russia’s participation in the joint naval drills signify the emergence of a so-called “counter-coalition” to confront the one that the US envisages creating, he wrote, adding “They also claim that the exercises send a hostile signal to Iran’s regional rivals while simultaneously making those two states the Islamic Republic’s “military allies” by default. Nothing could be further from the truth since neither of them is taking sides in that dispute.”

The US and its partners regularly hold joint military exercises all across the world at any given time of the year, which thus makes such events commonplace instead of exceptional misleadingly portrayed whenever China and Russia do them, wrote the analyst.

China and Russia’s military cooperation with Iran isn’t occurring at Saudi Arabia and the United Arab Emirates’ (UAE) expense, noted the American analyst. These two pairs of countries have improved their military relations with one another over the past few years, he added.

The argument can actually be made that their joint naval drills with Iran are being carried out partly to show their balanced approach to the region after such enormous military strides were recently made with Tehran’s Persian Gulf rivals, according to him.

It’s therefore disingenuous to portray China and Russia’s forthcoming drills as being aimed against any third party when they’re really just an exercise of what could be described as “military diplomacy,” or in other words, pursuing diplomatic ends through gentle military means, he noted.

In this instance, China and Russia are showing the world that they aren’t taking sides in the Persian Gulf dispute, simultaneously selling weapons to the local Kingdoms while also holding joint drills with Iran, he added.

By supporting the regional balance of power, China and Russia can encourage all parties to resolve their disputes through political means instead of military ones, the analyst concluded.