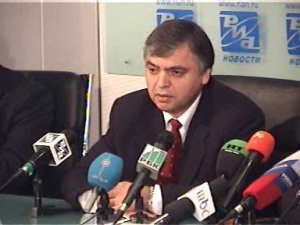 Iran has turned into a superpower in intl. arena: Safarov

MNA – Head of Russia’s Center for Contemporary Iranian Studies Rajab Safarov said that Islamic Republic of Iran has turned into a superpower in the regional and international arena.

Launching a joint naval drill with two other superpowers in the world i.e. Russia and China indicates a new chapter opened in history and conveys this message that Iran has turned into a power in international arena.

He made the remarks on Sat. in an interview with IRNA and added, “a joint military war game between Iran, Russia and China in the Indian Ocean indicates the key and important role of Iran which can guarantee security and stability of the region.

The main objective of this naval drill, which was held for the first time in the history of cooperation of three superpowers i.e. Iran, Russia and China, is unique of its kind, he emphasized.

Launching military coordination in international waters including north of Indian Ocean and Sea of Oman, providing stability and security of the waterways and countering international terrorism are of the three main objectives followed up by Iran, Russia and China, he stressed.

Organizing this naval drill also indicates that Russia and China without participation of Iran cannot provide and maintain their interests in this important region in the world, Head of Russia’s Center for Contemporary Iranian Studies Rajab Safarov stated.