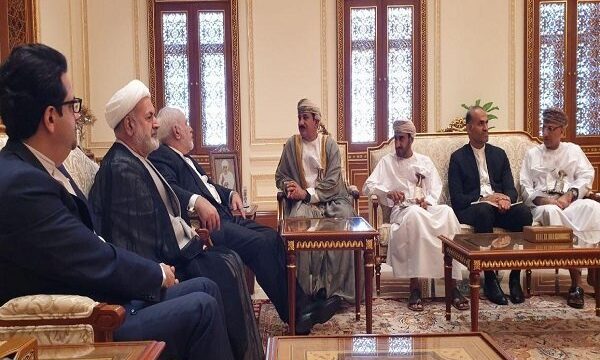 The two sides conferred on the expansion of amicable relations between Iran and Oman.

The Palace Office is one of the most powerful ministries in the Sultanate of Oman. It is a government body that has the most influence on national security and intelligence issues and the minister in charge has been the de facto national security advisor to the Sultan. The Palace Office also acts as a foreign liaison with a focus on all international intelligence and security matters.

The Palace Office Minister currently serves as the chair of the Defense Council (on behalf of the Sultan).

Prior to this meeting, Iranian FM Zarif held talks with his Omani counterpart Yusuf bin Alawi within the framework of the second round of talks between the two countries on economic and trade cooperation. The two diplomats attended the first round of talks on Monday.

Zarif’s trip to Oman is a follow-up to ongoing bilateral negotiations between the two countries.

The 18th Iran-Oman Joint Economic Committee meeting was held in Tehran on December 7 with industry ministers of two sides in attendance.