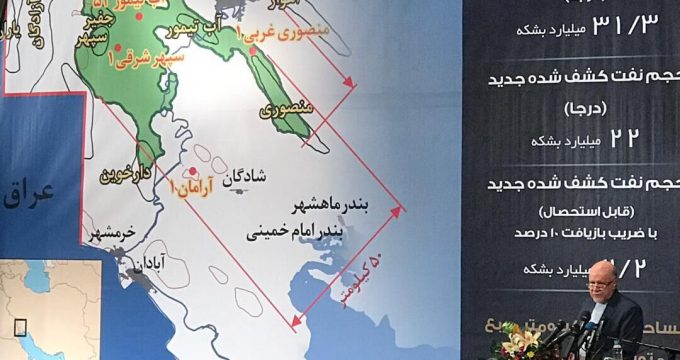 Why Namavaran discovery is a breakthrough

Iran is currently under sanctions and consequently its oil production has faced with restrictions. But Minister Zangeneh said Iran’s known oil and gas reserves should not be ignored in the mid and long-term.

Why Does Namavaran Discovery Matter?

There is each and every reason to believe that this discovery may not be ignored. However, first and foremost it is noteworthy that Iran stands fourth in terms of global oil reserves with about 159 billion barrels of recoverable oil. The country also comes second in gas reserves with about 34 tcm of recoverable gas. Considering combined oil and gas, Iran comes first in global hydrocarbon ranking. A simple review of the technical specifications of the Namavaran reservoir shows stratigraphic traps and the Ilam geological layer is located beneath the Mansouri, Ab Temiour, Sousangerd, Jofair, Sepehr and Darquain oil fields. Namavaran covers 2,400 square kilometers of land, located southwest of the oil-rich city of Ahvaz. It also straddles Karoun River. This reservoir layer is 80-310 meters thick.

News of discovery of Namavaran was announced by Iranian officials at a time when many thought giant explorations were over in Iran. However, the Namavaran discovery through modern methods in Iran revives hopes it would not be the last one.

Iran’s output capacity depends on using modern technologies for enhanced recovery. Zangeneh has highlighted this issue, saying: “With a 1% increase in the recovery rate, we would be able to extract 530 million barrels of crude oil from this 53-billion-barrel reservoir, which would generate $32 billion at oil price of $60 per barrel. Therefore, we must do our best in R&D in the upstream oil sector in order to enhance the recovery rate.”

Is the time of structural trap exploration gone?

Big oil discoveries started many years ago in Iran and officials say such fields would no longer be discovered, recommending that focus be on enhanced recovery methods. But a key point with the Namavaran exploration is the use of combined and stratigraphic traps. Saleh Hendi, National Iranian Oil Company (NIOC)’s exploration director, while stressing that the era of  exploring structural and anticline traps is over, said the giant fields located under these anticlines must be forgotten. Hendi has said: “Since 2016 with changes in the exploration approaches and attention to exploration objectives we made this big recovery by using state-of-the-art technology.”

Where did the initiative start for the Namavaran discovery? The extensive Sepehr seismic testing project in Abadan Plain showed the first sign of existence of a giant reservoir under oil fields in Khuzestan Province. That attracted the attention of NIOC Exploration Directorate’s experts. Then, three exploration wells were drilled and when the well data as well as seismic data were examined, the experts found out that a giant reservoir with big amount of oil was hidden there. In that way the Namavaran reservoir was discovered. Hendi said: “With the new approach that we have just adopted, this layer is likely to expand. I also promise to use combined oil traps comprising stratigraphic changes and old anticlines in the future.”

Applying modern technologies in enhanced oil recovery and improved oil recovery has been focused upon by President Rouhani. Announcing the exploration, Rouhani said: “We have to use cutting edge technologies wherever it may be.” Iran’s Petroleum Ministry has also obligated Iranian E&P companies involved in oil projects to take into account enhancing the recovery rate and engage foreign companies or consultants. Also, in case foreign companies are to develop oil and gas fields in Iran, they have to take into account the issue of enhanced recovery and use the latest technologies. As soon as news of this discovery spread, speculation was rife about Iran’s oil ranking. Some have raised the possibility of improvement in Iran’s oil reserve ranking, while some others say it was not yet clear how much Iran could extract from its reserves. In any case, the fact is that due to the US’s tough sanctions Iran is currently faced with many bottlenecks for developing its oil fields. In this regard, Zangeneh has said: “Iran’s proven oil and gas reserves could not be ignored in the mid and long-term.”

NIOC Exploration Directorate has managed over the past four decades to discover 36 oil fields and 37 gas fields, 26 of which shared with neighboring countries. Except for the years during which Iran was involved in imposed war, oil and gas exploration has been made every year. Hendi said NIOC claimed the top spot in global exploration from 2001 to 2005.

Half of Iran’s oil fields are in the second cycle of their life and any extraction from them would require investment for enhanced recovery. But the issue of US sanctions against Iran is also instrumental. The sanctions have adversely affected attraction of investment in the petroleum industry, thereby harming recovery from oil and gas fields. However, new discoveries over the past four decades have compensated for any decline. Therefore, Iran’s ranking has not declined in oil recovery and continues to claim the top spot in oil and gas reserves together.

However, the important thing is to use these reservoirs. It should be kept in mind that sanctions have imposed heavy costs upon Iran’s petroleum industry. This issue was highlighted by President Rouhani during his visit to Kerman Province. Rouhani said following Iran’s 2015 nuclear deal with six world powers and the subsequent lifting of the sanctions, Iran spent $800 million on the workover of wells to record the highest oil sales.