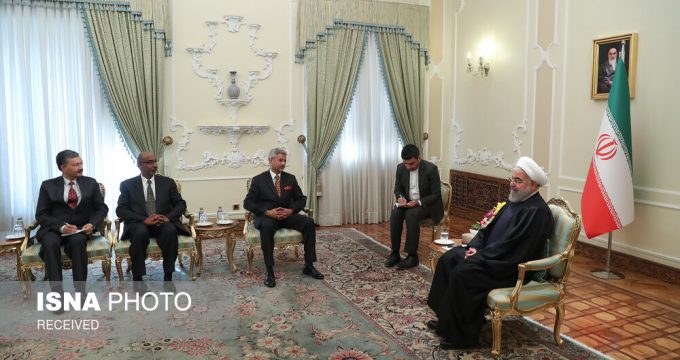 US has no choice but to abandon ‘maximum pressure’: Rouhani

MNA – Iranian President Hassan Rouhani said that US sanctions and pressures on Iran are transient and Washington will soon be forced to abandon its maximum pressure policy.

Making the remarks Monday in a meeting with the visiting India’s External Affairs Minister Subrahmanyam Jaishankar, Rouhani said that “in current circumstances that America is standing against nations with unilateral sanctions, we should try to preserve our bilateral ties and cooperation.”

“These conditions are transient and America has no choice but to abandon maximum pressure against Iran before or after its presidential elections,” he said.

“There is no doubt that relations between the two countries will further deepen with the resolve of the two Iranian and Indian governments and nations,” he added.

“We should make efforts to elevate the trade and economic relations between the two countries to a desired and expected level,” Rouhani said, reported his official website.

Referring to the cooperation between Iran and Indian in Chabahar, Rouhani said, “finalizing the Chabahar-Zahedan Railway and connecting it to the nationwide railway system can develop trade in the region.”

Stating that ensuring security in the region is very important for Iran and India, he said, “In this regard, the Islamic Republic of Iran has proposed the Hormuz Peace Endeavour (HOPE) Initiative that can be a good solution for enduring peace in the region.”

“Iran is seeking to ease tensions and ensure lasting security and stability in the region, especially in the Persian Gulf and Gulf of Oman,” he said.

At the same meeting, the Minister of External Affairs of India Subrahmanyam Jaishankar delivered the greetings of the Indian Prime Minister Narendra Modi to Rouhani and said, “to further develop cooperation and relations between the two countries in different fields, we need to work harder.”

Stating that India and Iran can deepen ties and cooperation, he stressed the importance of promoting cooperation between the two countries’ public and private sectors.

Development of relations between the Iranian and Indian banks is very important, he said adding, “fortunately today, cooperation between the two countries in Chabahar region has a very good pace and we should accelerate the implementation of projects.”

He added, “Iran and India have historical relations with each other and despite all problems, Iran will remain steadfast and powerful.”