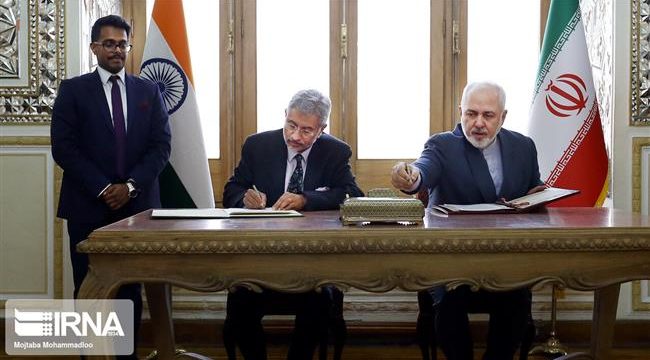 Zarif made the remarks in a tweet on his official Twitter account on Sunday after co-chairing the 19th session of the two countries’ joint economic commission, which was also attended by India’s Minister of External Affairs Subrahmanyam Jaishankar.

According to IRNA, during the joint commission meeting, heads of the commission from Iran and India signed various agreements reached in bilateral discussions.

The agreements covered a vast array of cooperation fields, including economy, trade, banking, transportation and shipping.

The Indian minister also discussed issues of bilateral interests as well as the two countries’ relations in a meeting with his Iranian counterpart earlier on Sunday.

Non-oil trade between Iran and India reached $4.74 billion in the 12 months that followed March 2016, up by 4.17% compared to the same period in the previous year.

Iran is India’s third oil supplier with India importing 12.5 million tonnes of crude from the Islamic Republic in the period running from April 2017 to October 2018.

India, Iran, and Afghanistan have signed an agreement to give Indian goods heading toward Central Asia and Afghanistan preferential treatment and tariff reductions at the Chabahar port city in southern Iran.

The Indian government has committed $500 million to developing the Chabahar port, with an aim to join an increasingly important transport corridor to resource-rich regional countries.

Indian Prime Minister Narendra Modi visited Iran in May 2016, the first by a person in his capacity in 15 years.

Iran’s President Hassan Rouhani also paid a visit to India in February 2018 at the official invitation of Modi.

During his visit to India, Rouhani was accompanied with a political and economic delegation, including Foreign Minister Mohammad Javad Zarif and a number of representatives from the Iranian private sector.