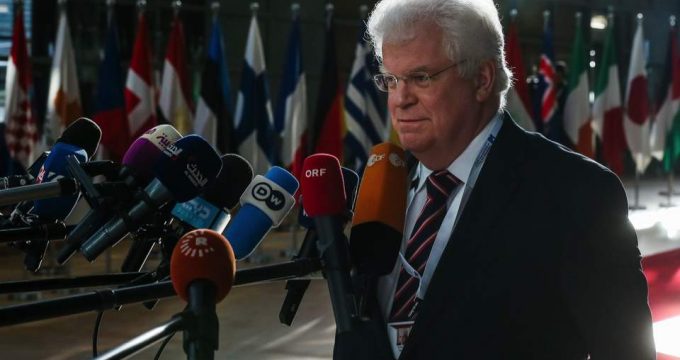 MNA – Russia’s Permanent Representative to the European Union Vladimir Chizhov said “it should be admitted that everything the Iranians have done so far [to scale down their commitments to JCPOA] is reversible.”

According to Interfax, the Russian official has agreed with the European External Action Service (EEAS) Secretary General, Helga Schmid, that the Vienna meeting on December 6 of the Joint Commission on the Joint Comprehensive Plan of Action (JCPOA) on Iran’s nuclear program was taking place at a “critical moment.”

“Of course, the situation is critical. This is the opinion of not only the EEAS secretary general, this is the opinion of all JCPOA participants. The Iranians made it clear that, unless there is positive movement by early January, they could begin the fifth stage of suspending the JCPOA,” Chizhov said.

“However, it should be admitted that everything the Iranians have done so far is reversible. One should give them credit: they think through their every step and are not doing anything which could not be reversed,” Chizhov said.

In his view, EU institutions still believe the JCPOA can be saved.

“Though, of course, this faith, let’s put it this way, is not getting stronger day by day. After the JCPOA Joint Commission’s meeting on December 6 consultations are continuing among all actors: the EEAS led by Helga Schmid, the European troika (Britain, Germany and France), Russia, China, and, of course, Iran. The United States is no longer involved in these discussions, having withdrawn from the deal. And not only that, it is also trying to prevent the other participants from implementing [the deal],” Chizhov said.

The Iranians are right in their recent claims about a weak effect from the JCPOA, he said. And there is little use from a special mechanism for payments with Iran, the INSTEX [Instrument in Support of Trade Exchanges], which is just one side of the issue, the other being an insignificant effect of the sanctions relief, the diplomat said.

“Even if tomorrow the INSTEX suddenly reaches full capacity, Iran still does not have that much of foreign cash to carry out transactions through this mechanism. Nevertheless, there are certain possibilities, of course. Moreover, Iran has created the so-called equivalent STFI [Special Trade and Finance Institute] mechanism, the Iranian answer to the INSTEX. These two mechanisms are already interacting,” Chizhov said.

On the US anniversary of the US withdrawal from the JCPOA, Tehran announced it would take steps back from its JCPOA obligations every 60-day unless the other signatories to the deal abide by their commitments under the accord.

As the latest step (the fourth step) to scale back JCPOA commitments, Iran injected gas into IR6 centrifuges and resumed uranium enrichment at Fordow nuclear facility in early November.

Iran has said that it will reverse its nuclear steps as soon as the other signatories return to their commitments.

European signatories to the deal have so far failed to honor their commitments, one of which was to normalize trade ties with Iran. The EU has proposed the establishment of a financial mechanism, dubbed INSTEX, to continue trade with Iran without suffering from US sanctions, however, the mechanism is yet to be operationalized.