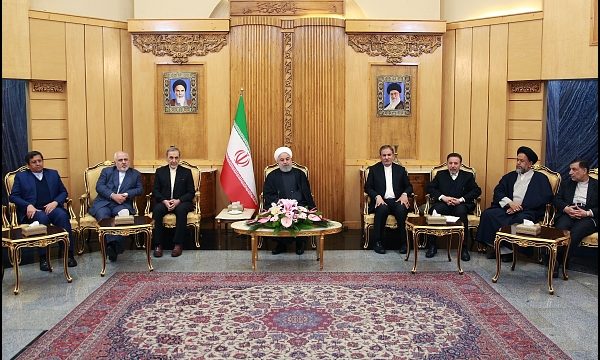 MNA – Referring to Japan’s willingness to continue their cooperation with Iran, Iranian President Hassan Rouhani said Japanese officials proposed a way to bypass US sanctions against Iran during his visit to Tokyo.

Upon his arrival at Mehrabad Airport, Iranian President told reporters that during his talks with Japanese officials they have proposed the Iranian side a new way to evade the US sanctions against Iran.

He said due to the harmful effects of sanctions on all countries many countries are making efforts to break the US sanctions including Japanese and Europeans.

Referring to his meeting with the Japanese PM, he said, “We discussed sanctions. Everyone knows that the US’ move in imposing sanctions is against the international regulations and the Americans have to return from the wrong path they have taken.

“Sanctions are to everyone’s detriment and a lose-lose decision,” he stressed.

“The Japanese, Europeans and others are working to bypass the sanctions and they have suggestions and solutions in this regard, and we believe that breaking the sanctions is a national and revolutionary duty for all of us.”

Touching upon the energy security in the region Rouhani added that Japan agrees with Iran’s plan.

The president also said the Japanese government has expressed its readiness to invest in Iran’s Chabahar.

Referring to the Kuala Lumpur Summit, where he took part in while in Malaysia, Rouhani said the summit is “a modern method for gathering Muslims and Islamic intellectuals”.

“Around 80 countries, intellectuals and experts and around 2000 guests were invited to the summit, and the leaders of Islamic countries, such as Iran, Turkey, Qatar, and Malaysia also took part at the event,” he said.

The President continued, “In addition to addressing the general assembly, a roundtable was held regarding how we should develop the World of Islam”.

Referring to the summit of leaders of Malaysia, Iran, Turkey, and Qatar, he said, “In this summit, good decisions were made for cooperation among the four countries”.

Rouhani added, “We had 3 or 4 meetings with Prime Minister Dr Mahathir Mohamad regarding bilateral relations and made good decisions in this regard, and he is willing to visit Iran in the near future.”

“Fortunately, good decisions have been made in financial and banking fields,” he added.

“On the sidelines of the summit, I had a meeting with President Recep Tayyip Erdoğan of Turkey and we discussed bilateral and regional issues, including Syria,” he said.

The President continued, “I also had a meeting with the Qatari Emir and discussed cooperation between the two countries, especially in the field of Hormuz Peace Endeavour (HOPE) Initiative.”