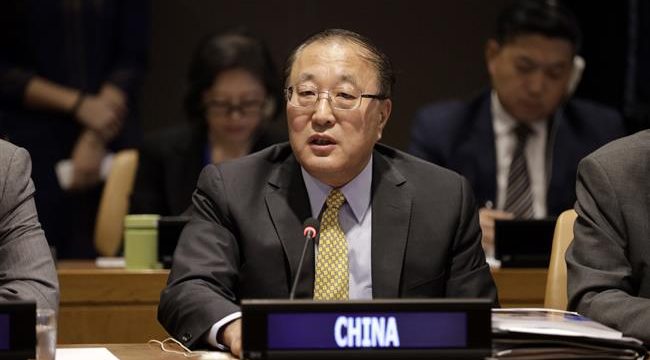 Press TV – China’s permanent representative to the United Nations says the implementation of a nuclear deal signed between Iran and major world powers in 2015 is the “only correct and effective” way to handle the current circumstances.

Addressing a UN Security Council meeting Thursday on nuclear non-proliferation, Zhang Jun said the Iranian nuclear issue may be entering a critical stage and noted that the implementation of the deal, officially known as the Joint Comprehensive Plan of Action (JCPOA), faces a severe test.

He called on all parties concerned to work together to restore the “balance of rights and obligations” under the JCPOA, stressing crucial importance of the deal for safeguarding the international nuclear non-proliferation regime and maintaining peace and stability in the Middle East.

Zhang also expressed concern over Washington’s withdrawal from the nuclear accord and re-imposition of unilateral sanctions on Iran.

US President Donald Trump, a stern critic of the landmark deal, unilaterally pulled Washington out of the JCPOA in May 2018, and unleashed the “toughest ever” sanctions against the Islamic Republic in defiance of global criticism in an attempt to strangle the Iranian oil trade.

In response to the renewal of the sanctions, Tehran has so far rowed back on its nuclear commitments four times in compliance with Articles 26 and 36 of the JCPOA, but stressed that its retaliatory measures will be reversible as soon as the European signatories — France, Britain and Germany — find practical ways to shield mutual trade from the US sanctions.

Speaking at a press conference in Beijing earlier this month, Chinese Foreign Ministry spokeswoman Hua Chunying called on the United States to stop its so-called maximum pressure campaign on Iran and making threats of deploying additional troops to the Middle East, saying Washington should find a diplomatic solution to reduce tensions in the region.

“The United States is not only unilaterally withdrawing from the Joint Comprehensive Plan of Action and exerting maximum pressure on Iran, but is also imposing sanctions or threatening to impose sanctions on other parties within the agreement,” she said.

Elsewhere in his address, Zhang said UN Secretary General Antonio Guterres also believes the US behavior remains in contradiction to the goals set out in the JCPOA and Security Council Resolution 2231, which endorses the deal.

The Chinese diplomat warned that such behavior may impede Iran’s capability to implement certain provisions of the JCPOA and Resolution 2231.

Briefing the same Security Council meeting on Thursday, UN political affairs chief Rosemary DiCarlo stressed the importance of implementing the nuclear deal, which, she said, remains a “cornerstone of international peace and security.”

DiCarlo said the “full and effective implementation” of the JCPOA was “key to ensuring the peaceful nature of Iran’s nuclear program and to secure tangible economic benefit to the Iranian people.”

She expressed “regret” about the US withdrawal as well as “the recent steps taken by Iran to reduce its nuclear-related commitments.”

“Certain actions taken by the United States, since its withdrawal from the plan (JCPOA), are contrary to the goals of the plan”, she said.

DiCarlo said the UN chief considers the full implementation of Resolution 2231 by all member states “as an integral component of our collective conflict prevention efforts.”

Europeans likely to trigger dispute resolution process but shy away from sanctions: Diplomats

Meanwhile, diplomats said on Friday that the three European parties to the nuclear deal are likely to trigger a dispute resolution process in January but would stop short of rushing to restore UN sanctions that would kill off the accord, Reuters reported.

Six European and Western diplomats said Britain, France and Germany had agreed in principle to begin the process but they would still wait to see how significant Iran’s steps were before taking a final decision.

“Launching the process aims to resolve the problematic issues and save the deal,” said a European diplomatic source. “It’s not automatic that UN sanctions will follow. If we decided to do that (reimpose UN sanctions) it would mean that we have decided to put the final nail in the coffin.”

European members have begun raising the possibility of triggering the JCPOA’s “dispute resolution mechanism” since last month. The measure is also known as the trigger mechanism and its activation can lead to the return of the UN sanctions against Iran.

Iran has criticized the trio for failing to fulfill their obligations under the JCPOA and to salvage it.

Diplomats said the Europeans would focus on extending the process rather than pushing towards sanctions unless Iran’s upcoming steps crossed an unacceptable threshold.

Three diplomats said the E3, particularly France, were lobbying Russia and China to get them on board to show unity between the five but Moscow and Beijing have expressed opposition so far to launch the process.

In an interview with China’s CGTN TV channel on Tuesday, Iranian Deputy Foreign Minister for Political Affairs Abbas Araqchi censured the European signatories to the deal for their inaction to save the agreement after the US withdrawal.

Araqchi said that Iran could have pulled out of the accord after Washington quit last year but Tehran was convinced not to do so when the other participants promised to offset the US withdrawal.