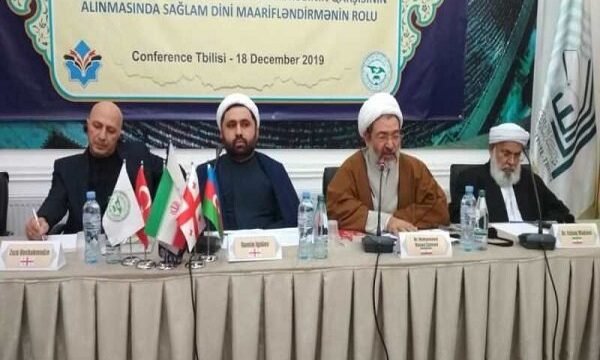 Georgia calls for coop. with Iran in fight against extremism

MNA – Head of State Agency on Religious Affairs and Adviser to the Prime Minister of Georgia Zaza Vashakmadze called for cooperating with the Islamic Republic of Iran in the fight against extremism.

He made the remarks on Wed. in the International Conference of “Role of Religious Education in Confronting Extremist and Takfiri Movements” in Tbilisi.

Georgia is ready to cooperate with Iran, Turkey and Republic of Azerbaijan jointly in the field of fighting against extremism, he said

He pointed to the measures taken by Tbilisi to counter religious extremism in Georgia and emphasized the significance of healthy religious education and training.

The International Conference of “Role of Religious Education in Countering Extremist and Takfiri Movements’ was held concurrent with the “World Day Free from Violence and Extremism” in the presence of intellectuals, thinkers, scholars, clerics and representatives from Iran, Georgia and Republic of Azerbaijan and Turkey in order to develop inter-religious scientific cooperation, unity and amity against expansion of extremist thoughts.