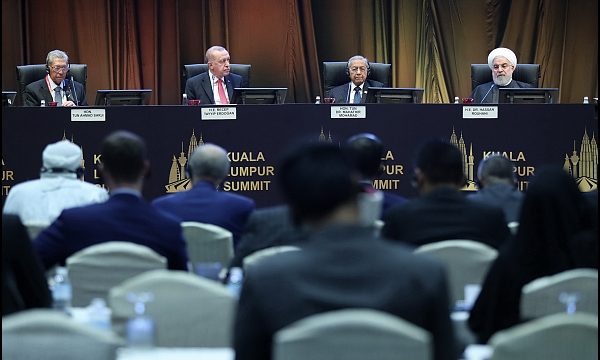 We have historic responsibility for clearing the route of dignity, pride for Islamic community: Rouhani

President.ir – Speaking at the 1st Roundtable Session of the Priority of Development and the Challenges at the Kuala Lumpur Summit, President said that we have a historic responsibility for clearing the route of dignity and pride for the Islamic community, stressing, “Today, it is time to think of a place that the Islamic Ummah deserves”.

At the session that was held on Thursday at Kuala Lumpur Convention Centre, Malaysia, President Hassan Rouhani said, “I would like to re-express my thanks to the Honourable Prime Minister of Malaysia for giving the valuable opportunity to us and experts”.

The decline of the Islamic civilisation began when insular, dogmatic currents turned to the Islamic jurisprudence and, unfortunately, some of them ignored the role of human wisdom and experience in management of societies, while Islam advises us that ‘we have sent you 2 messengers for your guidance, one of which is wisdom and the other the Prophet of Islam (PBUH).

Unfortunately, it was because of such reactionary ideas that distanced Islamic societies from progress and developed an extremist idea in the Islamic community, which harmed both our civilisation and progress, and damaged the true face of Islam.

Opposite to the extremism that was trying to prevent us from wisdom, rationality and others’ experience, was another extreme view that told us there is no way for advancement except following the western models in their entirety, trying to divert us from our national traditions.

The Islamic societies paid a high price because of these two extremist views.

Today, it has become clear to everyone that in the long run, moving towards development without paying attention to historical values and religious beliefs can have very destructive effects on our societies.

It is time to think of a place that the Islamic Ummah deserves. The Islamic Ummah will not achieve its true place unless it regains the lead of friendship and free Muslims from the chains of anger and hatred.

The Islamic Republic of Iran is ready to cooperate with other Muslim countries. The fruit of extensive investment in the higher education and bringing up our young scientists have fortunately put our country at the highest levels of science at the regional and global stages. Fortunately, we have reached many great achievements in some fields such as nano- and biotechnology, cognitive sciences and peaceful nuclear knowledge.

The main reason that superpowers have not be able to damage our independence and sovereignty in the past 41 years is because of democracy and people’s active presence. In the past 40 years, we have held 38 elections, in which people have attended in large numbers.

Today is the day of deciding to contribute to the progress of the Muslim world through cooperation, and we have to work together and alongside each other. There are many fields for synergy in the Islamic world today. It is important for us to be able to develop cooperation with prudent, mature steps.

We believe that we can get closer to each other in five fields of economy.

The first field is financial, monetary, banking and insurance cooperation. We know that today, many of our economic developments rely on foreign insurance and major countries, while we Islamic countries are capable of investing on an insurance.

The third field of trade. We have been able to stand alongside each other in the Muslim world, especially in the fields of halal goods and services.

The other sector is tourism. In the Muslim world, we have very good opportunities for tourism in terms of culture, history, cultural heritage, handicrafts and weather, which we can promote to develop the tourism industry.

With the emergence of the new technology of blockchain, we can found our own cryptocurrency with the contribution and cooperation of our central banks, and as Mr Mahathir Mohamad was pursuing the Islamic Dinar last year, we may be able create a new currency in the World of Islam and take advantage of digital currencies.

We can agree on a short-term and mid-term action plan and provide a mechanism for the constant monitoring of issues for finding a realistic solution.

Let it be clear to everyone that the goal of this new move, which we can call IDF, is perfection of Muslim societies.

I thank you for your attention

Hassan Rouhani, Islamic Community, Kuala Lumpur Summit December 19, 2019
Iran English language newspaper headlines on Thursday, 19-12-2019
Russia and Iran get closer on security and Syria after US vote to punish them